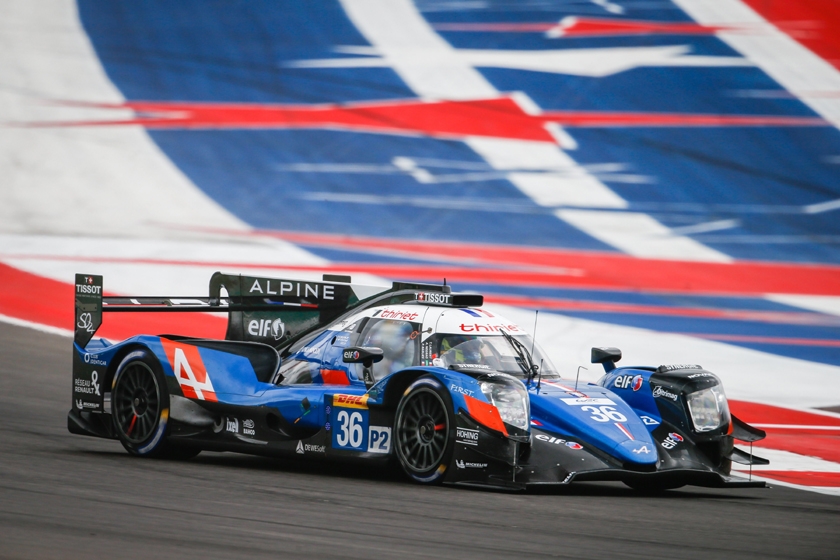 After a two-month break, the FIA World Endurance Championship was back in action for round five of the 2019-2020 season at the Circuit of the Americas.

Competitive straight away on the Texan track, the Signatech Alpine Elf team confirmed its strong form when Pierre Ragues and Thomas Laurent qualified the Alpine A470 third in what was a hotly contested session.

On Sunday, André Negrão was entrusted to start the race. Blocked on the outside at the beginning of the steep climb heading to turn one, the Brazilian driver managed to hold on to third place before overtaking the n°22 United Autosports entry with an outstanding passing move on lap seven.

Soon after a virile attack from the n°29 Racing Team Nederland, André Negrão moved into the lead instead of making a pit stop before consolidating his spot into the provisional top three during his second stint.

Pierre Ragues continued the theme, taking the lead of the LMP2 category after just one lap, but the Normandy native’s momentum was halted by a broken front-right brake disc. Despite the lightening quick work of the team, the Alpine A470 rejoined the race in ninth place, two laps down from the leaders.

With no chance of a third consecutive win in Austin, Les Bleus set off on a genuine time trial in the middle of a race that was run at a furious pace.

Pierre Ragues, Thomas Laurent and André Negrão then showed total self-sacrifice to make up their lost ground by moving up to eighth place at the midway mark of the race then to within striking distance of seventh before Thomas Laurent's final double stint. The Frenchman was called upon to finish the race and he passed the n°33 High Class Racing car before climbing up to sixth place just minutes before the chequered flag.

Despite the time lost on the track and the 4:40s in the pits to replace the broken brake disc, the n°36 Alpine A470 finished just 4:11s behind the winners. The trio leaves Austin knowing they did everything they could and are 30 points adrift of the championship leaders with 116 points still up for grabs in the final three rounds.

More motivated than ever following this result that is far from its true potential, the Signatech Alpine Elf team now heads to Florida to prepare for the 1000 Miles of Sebring (18-20 March) before the return of the FIA World Endurance Championship to Europe.

"While we are disappointed this evening, we need to focus on the momentum that has been recreated in Austin. The two-month break has allowed us to take stock and put things in place to stay in the race for the title. Everyone reacted brilliantly as we reached our best level of performance of the season. Unfortunately, things didn’t go our way with the broken disc, which is extremely rare. We are still investigating the reasons and it may have been caused by a rim impact during a stop, but it's all the more frustrating as we had just taken the lead. We spent 4:40s in the garage and we finished just 4:11s behind the winners without taking any risks. I thus would like to congratulate the entire team, André for his start of the race, Thomas for his push and Pierre for being one of the fastest silver drivers. These eight points will be important when the numbers are tallied up and no one can count us out if we manage to maintain this level in the final three rounds of the season."

"We got off the weekend off to a strong start with an excellent car, well set up and very fast early on. After a fine job of qualifying from Pierre and Thomas, I got a good start and battled for the lead with a solid pace. I handed the car over in second place, just three seconds behind the leaders, but the brake issue unfortunately cost us a shot at the podium. We kept pushing to finish sixth and score a few extra points. We are still in contention, there are three races to go and we will continue to fight all the way to the end."

"We have to focus on the positives despite this broken brake disc that deprived us of a potential win. We're off to a good start in 2020 having returned to the sharp end of the order thanks to a high level of performance. We also had a good qualifying session with the third best time and André made a superb start that allowed me to take the lead on my second lap. For sure, things are getting complicated in the championship, but there are still a lot of points to be handed out and the work done this winter by the team is already paying off."

"We were competitive straight away following several difficult races last year. That quickly allowed us to find the right direction and put in our best qualifying run of the season. It was a good omen as we knew our race pace would be excellent and we showed it for six hours today. The fact that a brake disc decided our fate is hard to take as victory was within our grasp, but we never gave up. It's frustrating, but motorsport is like that sometimes. Even though it happened to us at the worst possible moment, the team is back on track and we have a competitive car both in qualifying and in the race. I'm looking forward to seeing what Sebring has in store for us."

Mehr in dieser Kategorie: « Alpine Exhibition at the International Automobile Festival of the Invalides: Between Retrospective and Prospective "Légende GT" and "Color Edition 2020": new special models for the Alpine A110 »