The Alpine A110 and France’s Gendarmerie – then and now 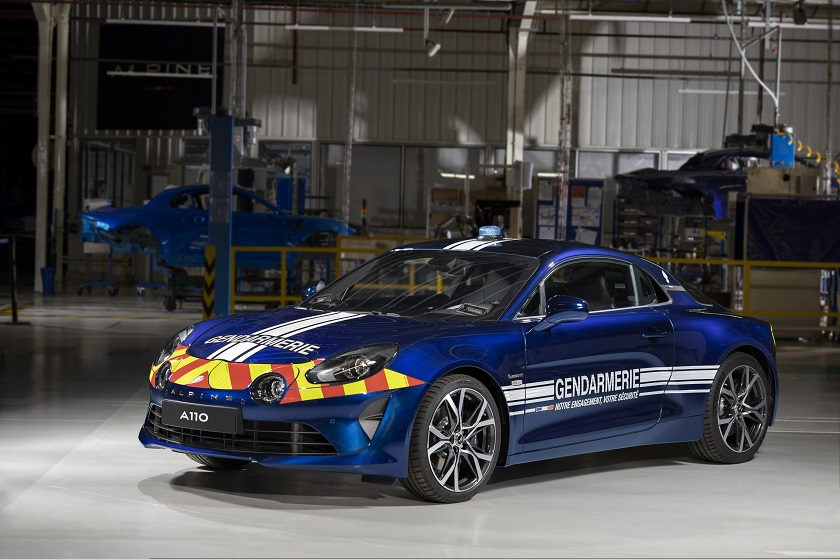 When the Gendarmerie needs to respond swiftly to an incident on one of France’s motorways, high-performance wheels are a must. It has consequently placed an order for 26 Alpine A110s to take over from the Renault Mégane R.S.’s currently in service. Squadron Leader Richard Filmotte – curator of the force’s national museum – explains how the contract rekindles the Gendarmes’ association with the iconic berlinette that dates back more than 50 years.

For a generation of French motorists, spotting a blue Renault 4 or Estafette van in the rear-view mirror or by the roadside prompted the immediate question: “Have I done anything wrong?”. For decades, these Renault models epitomised the Gendarmerie’s surveillance of the nation’s roads. As the motorway network expanded in the 1960s, however, the organisation felt an increasing need to be able to count on cars capable of travelling in excess of 200kph.

"When they carry out missions at speeds of up to 230kph, it is essential that our rapid intervention drivers feel as one with their vehicle" Richard Filmotte, Squadron Leader, Gendarmerie Nationale

A special car for a specific mission

“When the Gendarmerie was tasked with patrolling France’s motorways, the importance of rapid-intervention operations soon became apparent,” says Richard Filmotte. “At the same time, the creation of a bespoke squad equipped with fast vehicles provided our organisation with a more modern, high-tech image that was reinforced when we started running Alpine A110s in 1967.”

The cinema and popular legend have forged a commonly-held perception that the Gendarmerie’s motorway work chiefly involves fast chases, but the latter are quite rare, in fact. “We have other ways of intercepting speeding motorists,” observes Richard Filmotte. “The prime mission of our rapid intervention team is to protect road users through our ability to respond promptly in the case of an incident, and that calls for powerful vehicles that are able to reach the scene as quickly as possible.”

The crews of these cars undergo a painstaking recruitment process. “They are subjected to a thorough medical examination and their driving skills are evaluated around a circuit,” explains Richard Filmotte. Those selected are given specialist training at the Le Mans-Bugatti racetrack, the aim being for them to feel as one with their vehicle so that they may focus solely on their mission. “Anticipation is essential, and the car they use must be a tool that permits them to do just that.”

After the famous berlinette, the organisation switched to another Alpine model, the A310, which served from 1973 until 1987. The squad later had access to the GTA , but it was never commissioned for motorway patrol work. Renault Group vehicles that have since served the Gendarmerie extend from the Renault 18 Turbo (1984 until 1987), Renault 21 2-litre Turbo (1992-1995) and Renault Mégane IDE (2001-2006) to the more recent Renault Mégane R.S. (2011-2021). Richard Filmotte’s museum in Melun, south of Paris, is the proud owner of one of each of these cars.

A fresh mission for the A110

Today, it is the latest Alpine A110 that is poised to follow in the tyre prints of its illustrious predecessors after last October’s announcement that Renault Group had won the tender launched four months previously.

The model was singled out thanks to the performance and precision handling of its chassis and 252-horsepower engine. However, instead of the brand’s familiar metallic blue, the new patrol cars will feature a darker Abysse Blue livery. “It’s been some years since we last required our vehicles to be painted in the Gendarmerie’s traditional colour,” notes Richard Filmotte. “For cost reasons, we use the nearest available shade in the manufacturer’s catalogue.”

After their assembly in Dieppe, Normandy, the 26 Alpine A110s will be handed over to specialist company Durisotti at its Sallaumines facility near Lille where, in addition to their original equipment, they will be fitted with accessories such as flashing lights, sirens and illuminated dynamic message boards, as well as the appropriate decals and reflective markings, etc.

And in years to come, one the cars will no doubt be set aside to be displayed alongside its ancestors in Melun where Richard Filmotte will be able to cherish it with the same care and attention he bestows upon the A310 he had the privilege of driving himself earlier in his career.

Mehr in dieser Kategorie: Alpine in pursuit of the 24 Hours of Le Mans virtual »
Nach oben