Alpine in pursuit of the 24 Hours of Le Mans virtual 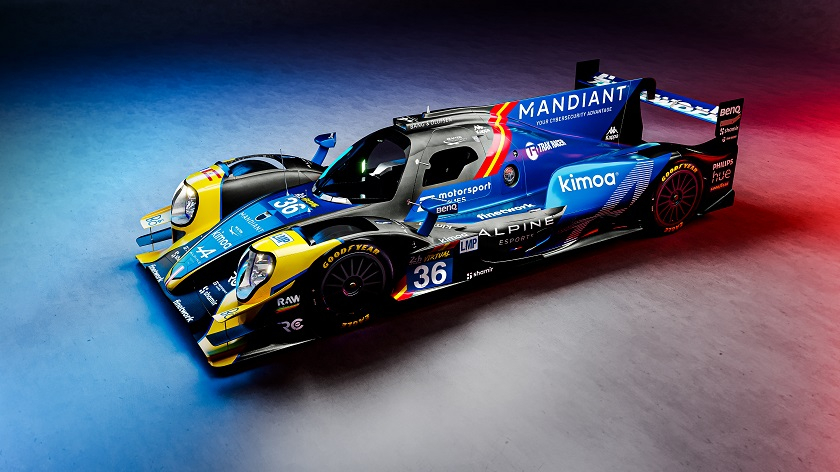 Alpine's motorsport activities continue relentlessly into 2022. After the Formula 1 World Championship, the World Endurance Championship and the F1 Esports Pro-Series, the "Arrowed A" is now taking on the 24 Hours of Le Mans Virtual.

Organised by the Automobile Club de l'Ouest, the FIA World Endurance Championship and Motorsport Games, the 24 Hours of Le Mans Virtual is taking take place over the course of a week (from 9 to 16 January). The drivers are competing on the 13.626-kilometre Circuit de la Sarthe via the rFactor2 platform.

All the challenges inherent to the endurance racing classic are reflected in the game: driver changes, random weather, variety of light conditions, car damage, tyre degradation, fuel consumption and even the maximum driving time to be respected by each driver.

Alpine is pulling out all the stops for edition two of the 24 Hours of Le Mans Virtual. Two-time 24 Hours of Le Mans winner and World Endurance Champion Fernando Alonso captains the #36 Alpine. The Spanish driver is overseeing and advising 2021 F3 Rookie of the Year and Alpine Academy driver Victor Martins. Michelin Le Mans Cup driver Sacha Lehmann, Alpine Esports Team driver Patrik Sipos and Olli Pahkala is completing the line-up in the #36 car.

The second crew is formed by Eneric Andre, Peter Zuba, Antoine Doquin and Romain Boeckler. Their goal will be to excel in the #15 Alpine Esports entry.

In its inaugural edition, the 24 Hours of Le Mans Virtual attracted more than 14 million people from 57 countries during the 25 hours of broadcasting. On Facebook, YouTube and Twitch, the event totalled 8.6 million views and more than 131.5 million impressions on social media with the hashtag #LeMans24Virtual.

The 24 Hours of Le Mans Virtual will be broadcasted live from start to finish on Eurosport, ESPN, Sky Sports and J-Sports as well as the FIA WEC app and social media (YouTube, Facebook, Instagram, Twitch).

Fernando Alonso, Alpine Esports #36 captain: "I am thrilled to be the captain of the #36 Alpine in the 24 Hours of Le Mans Virtual. I love endurance racing and it's always good to stay in touch with motorsport from a personal point of view. In recent years, simracing has become more professional and popular. I'm a big esports fan in general. I am looking forward to helping Victor Martins, one of our Alpine Academy drivers. He has experience in simracing, and I'm sure the #36, along with the other excellent drivers, will be competitive."

Victor Martins, Alpine Esports #36 driver: "The 24 Hours of Le Mans Virtual will be my first official race in the Esports community. I am extremely excited and pleased to share this experience with two-time Formula 1 World Champion Fernando Alonso. It will be interesting to see how he adjusts to this type of competition. I hope to learn from him and apply what I pick up to my racing career. We're going to have a lot of fun and I can't wait to start preparing for the race."

Richard Arnaud, Alpine Esports Team Principal:: "After participating in the 24 Hours of Le Mans Virtual last year as a manager, I am delighted to be leading the project with the Alpine Esports teams in 2022. It's an honour to have the opportunity to work with a two-time Formula 1 World Champion like Fernando, but also with Victor, whom I've had the chance to race against in simracing in the past. The commitment of these two champions shows how much potential this discipline has, and more importantly, how subtle the line between the virtual and real worlds is. We have a lot of work to do to meet this challenge. One thing is clear: all of us will do our utmost to score a brilliant result for Alpine Esports."

Mehr in dieser Kategorie: « The Alpine A110 and France’s Gendarmerie – then and now
Nach oben