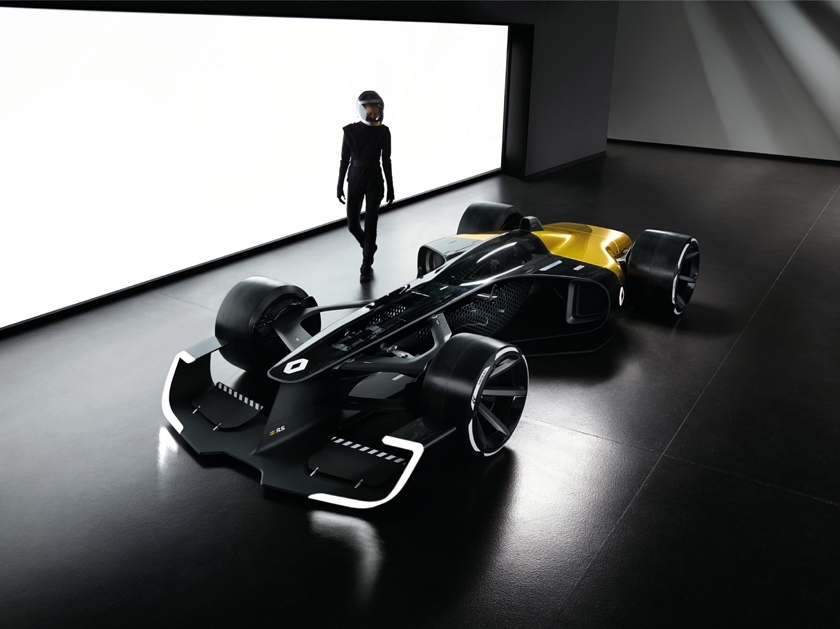 “One role of Renault Sport Racing is to anticipate the future of Formula 1 so that it draws a maximum number of fans in an environment consistent with Groupe Renault’s objectives. We look forward to generating inspired conversations with the racing community, fans and enthusiasts through this concept that highlights our ideas and desires.” Cyril Abiteboul – Managing Director, Renault Sport Racing

“Renault and China share a passion for motorsport. To emphasize how important the China market is for Renault we are excited to reveal the R.S. 2027 Vision at Auto Shanghai 2017. Following the launches of Kadjar and New Koleos in 2016, Renault is also announcing that Espace will go on sale in China to provide the market a robust SUV range as part of our ambitious plan for the world’s biggest market.” François Provost – Chairman of Asia-Pacific Region, Renault, and CEO of DRAC (Dongfeng Renault Automotive Company)

Renault’s vision of Formula 1, ten years from now, places people at the centre –one of Renault’s core values– as a vital cornerstone of F1 experience. Propelled by a high-powered engine, the driver can showcase qualities as a top athlete for the pleasure of fans. More attractive, Formula 1 also becomes safer, to better protect participants, and takes more active responsibility towards the environment.

The year is 2027. At every Grand Prix, the competition is fierce. With a weight / power ratio never before reached in the history of Formula 1 (1 megawatt on the whole for a weight limited to 600 kilos), human performance is at the heart of the sport.

To make Formula 1 more captivating, fans benefit from a closer connection to the driver, whether they are watching trackside or on television.

In terms of design, Formula 1 evolves to become equally appealing to racing enthusiasts while it attracts new fans.

R.S. 2027 Vision: 50 years of Renault Formula 1 drawing from the past, envisioning the future

As Renault prepares to celebrate 40 years of involvement in Formula 1 in 2017, the R.S. 2027 Vision concept envisions F1 at 50. Renault’s design team created it in collaboration with Renault Sport Racing. In addition to all the fundamentals expected from a Formula 1 car, it also features Renault and Renault Sport cues, including the logos and emblems of both brands.

The R.S. 2027 Vision concept not only seeks to pay tribute to four decades of Renault dedication, innovation and success in Formula 1, but also underlines a strong commitment to the future.

“The melding of creative energy and technical expertise from Renault’s design teams and Renault Sport Racing has created a visionary yet completely credible and authentic R.S. 2027 Vision; a Formula 1 exercise that puts people at the heart of the sport, and communicates Renault’s view of the F1 future.” Stéphane Janin – Director, Concept Car Design

Safety, always one of Groupe Renault’s chief objectives, naturally remains a priority in Formula 1 in 2027. Numerous decisions have been taken to make the discipline even safer for all involved, notably the drivers.

Safety is similarly ensured by the ultra-connected nature of these Formula 1 cars –increasingly common features across Renault’s passenger car range. These functions exchange information based on what is happening in the race, seamlessly.

These decisions serve to make the cars both safer and cleaner, without detracting from the spirit of single- seater racing.

Renault: passion for life - customers backed by 40 years of success in Formula 1

An commitment driven by innovation

Renault sees motorsport as a formidable opportunity for the development of cutting-edge technologies that go on to benefit its road vehicles, either directly or indirectly.

Since its Formula 1 debut in 1977, Renault has consistently played an important role in the sport, pioneering ambitious, avant-garde technologies fuelled by its passion.

The heritage of all these revolutionary innovations is still visible in today’s Formula 1 with the return of the V6 turbo –in hybrid form– in 2014. By meeting the challenge of the new regulations, Renault has contributed its extensive expertise and skills as an F1 engine supplier to boost technological innovation, an invaluable asset when it comes to the brand’s upcoming road models.

A Formula 1 record that commands respect

Renault has been active in Formula 1 for almost 40 years. In addition to racing as a team, it has also been an engine supplier to the sport’s leading teams over the years, harvesting no fewer than 12 Constructors’ world titles and 11 Drivers’ crowns in total (see complete list below).

Renault left an indelible mark on each era of its involvement as a team:

As engine supplier, Renault has equipped the sport’s top teams during different eras over the years, contributing to numerous race wins and Drivers’ titles:

In total, Renault is the most successful manufacturer since 1977, including:

Alain Prost, a distinguished ambassador for Renault and Formula 1

The motorsport star’s association with Renault began in 1976 and continues today, since Alain Prost is linked with Renault in the following ways:

To put the human factor back on centre stage, Renault’s vision for Formula 1 in 2027 also covers the technical side. In addition to delivering higher performance, cars have taken advantage of the new electrification technologies to become even more efficient. Consequently, they contribute to making Formula 1 a continued test ground for passenger vehicles while helping the race industry follow a responsible approach to costs.

Maintaining its role as a platform for Renault’s advanced technology, Formula 1 in 2027 drives innovation efforts towards higher engine and aerodynamic efficiency.

Many of these innovations enrich Renault’s technology know-how, some of which are already available in its current range of passenger vehicles, for example, Renault’s MULTI-SENSE system with active damping and the high-energy density batteries of Renault ZOE Z.E. 40.

Renault’s vision of Formula 1 in 2027 also advocates for a responsible approach to costs. By capping expenditures, the discipline can attract more manufacturers and teams for a long-term commitment.

A financially level playing field injects an extra element of excitement into the season, granting all teams an equal opportunity to compete.

In response to television audience trends and shifts in broadcasting formats, Renault explores how Formula 1 in 2027 could become a more compelling form of entertainment. So, the format of Grand Prix weekends has been revised to make them more diverse, with exciting new opportunities to promote the drivers:

With this vision, Renault is sending a powerful message to the sport’s fans about the continued excitement and innovation ahead in Formula 1 racing.

Also on show on Renault’s stand at Auto Shanghai 2017 is the Étoile Filante, a car that embodies the brand’s long ties with motorsport. Last year marked the 60th anniversary of its land speed record - two of which still hold - established by this “fireball” at the Bonneville Salt Flats in Utah, USA, on September 5, 1956.

The Etoile Filante had previously been presented to the press on June 22nd, 1956 on the Autodrome of Montlhéry. It was born thanks to the meeting of five men, united by the will to beat records:

Performed across the Atlantic, this performance benefited from a strong media impact. It helped to establish Renault’s reputation as a pioneer around the world at the moment when was launched the Dauphine, allowing this small popular car to be sold in the United States as soon as 1957.

From a technical point of view, the Étoile Filante allowed Renault to progress by studying the ground behaviour and the braking of a vehicle of very great finesse moving at a very high speed. Only two copies of this extraordinary car, with a design ahead of its time, have been built.

In the same spirit as the Étoile Filante, Renault’s avant-garde vision for the future of Formula 1 seeks to foster innovations that also inspire the designers of its upcoming road cars.