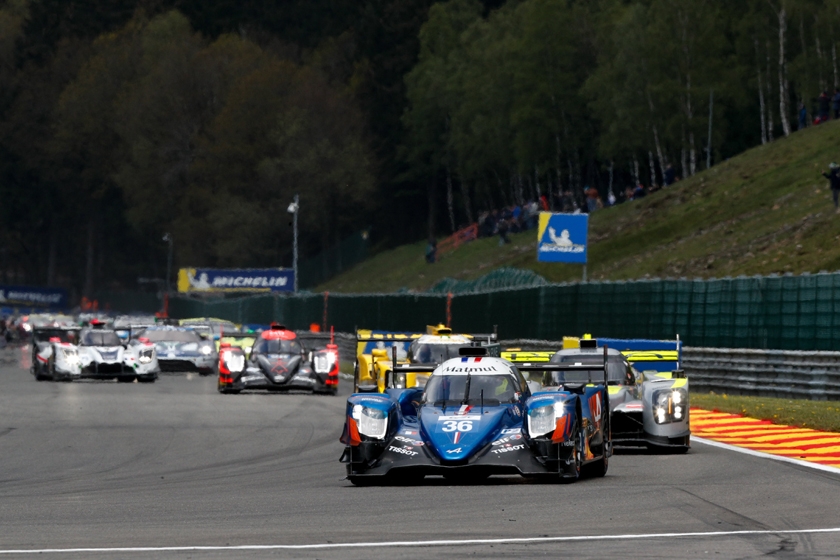 Beginning on Thursday, the Signatech Alpine Matmut team and the entire field was welcomed to Spa-Francorchamps by extremely difficult and unpredictable weather.

Following a first session focused on set-up, the no.36 Alpine A470 was caught out by the rain in the afternoon. The French squad still managed to gather a trove of information in the final session before André Negrão and Pierre Thiriet went on to qualifying fifth in LMP2.

The race began under threatening skies at 13:30 on Saturday. First in the car, André Negrão immediately picked up a place, but it began to rain at the end of lap two.

Very quickly, the conditions became hellish as light snow began to fall and the temperature dropped to 1°C. The Brazilian came in for Michelin rain tyres, then the team adapted its strategy thanks to a lightning pit-stop at the end of the first safety car period.

Alpine’s rivals switched to slicks during a break in the weather as well as the second neutralization, and Andre Negrão emerged in the overall lead before handing over to Pierre Thiriet as the third hour began.

On a dry track surface, the French driver put in a solid double-stint by combining speed and consistency at half-distance, but Ho-Pin Tung managed to surprise him just before the storms returned.

Nicolas Lapierre took over to pour the pressure on the Chinese driver. While hail pelted Spa-Francorchamps, the Platinum driver made his stop a lap earlier than his competitor to retake the lead.

The advantage that he quickly built was reduced to zero by another safety car intervention. Pastor Maldonado made the most of it as the race entered the final hour. Following another pause in the action, Nicolas Lapierre continued his triple-stint being third with 15 minutes remaining while the two cars in front of him still had to stop.

The torrential conditions and sometimes-precarious visibility forced the race stewards to wave the red flag 11 minutes from the chequers. Despite an error-free effort from the drivers on the track and the team with the strategy, the Alpine A470 had to settle for third place, which runs its series of consecutive podium finishes to seven and gains the upper hand from the championship rivals.

The final round of the reconquest will take place next month at the 24 Hours of Le Mans.

“In my 29 years in this sport, I have never been involved in a race where it snowed! it was hard to get the right tyres and operating window in these hellish conditions, especially as we are still learning the Michelins. Nevertheless, we did a very good job because our undercut strategy saw us take the lead in LMP2 and overall after a relative sub-par qualifying run. We led for more than half of the race, the drivers made no mistakes and the team was fantastic in being by far the fastest in the pits. However, I am a bit bitter because victory was within our grasp if not for the last two safety cars... The field regrouped, one team did not have to stop and another did not reach the minimum driving time of its Silver driver, which became inconsequential with the red flag. The team deserved better, but the most important thing is that we reached our main target. We will head to Le Mans with the lead in both championships. As we have always said, the titles will be decided at the 24 Hours and we cannot wait to be there!”

Nicolas Lapierre: “We did the most important as we wanted to keep the lead of the Drivers’ championship while taking control of the Teams’ classification. We also learned a lot about the Michelins in all conditions, but there is still a little disappointment because the two cars ahead of us would have had to make another stop to finish the race. The entire team did an excellent job on the strategy, and we didn’t turn a wheel wrong. This was our race to win if not for the red flag, but we are already looking ahead to Le Mans, where we will arrive more serene and in a position of strength.”

André Negrão: “The race was very tricky with snow, rain and clear skies from start to finish. There were a lot of highs and lows, but we made no mistakes. We all worked very well and we will battle for the title just until the end. I am very happy with our performance and our result, even though it could have been better without the red flag. Motorsport is sometimes like that and now it's time to focus on Le Mans!”

Pierre Thiriet: “I am very pleased, because I had a lot of fun in my double-stint. I was confident and the car was fast. We did a fantastic job as a team, especially with the strategy and in the pits. Our risks paid off and my two team-mates managed to get the very most out of the car in extremely tough conditions. We deserved to be better rewarded, but there are still a lot of positives to take from the race and just one team ahead of us was eligible to score points. It will be all to play for at Le Mans and we will arrive in the best conditions.”