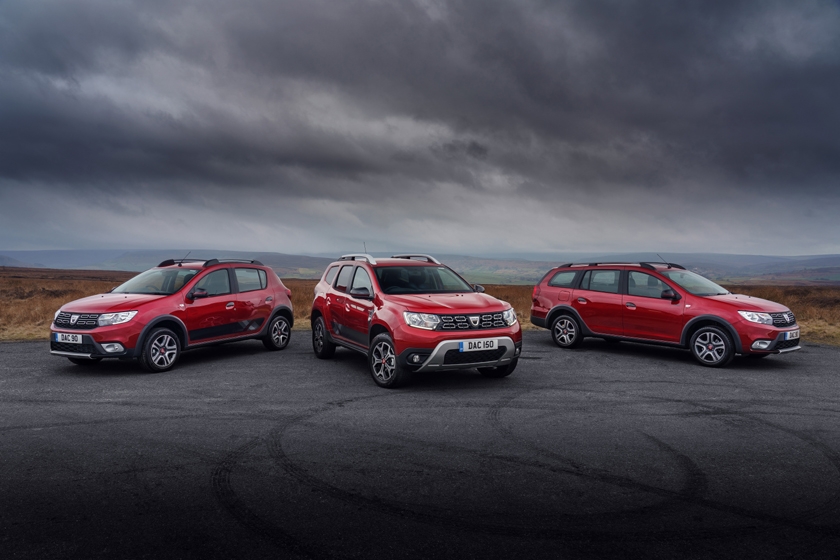 Dacia has launched its new top-of-the-range Techroad special editions, now available to order with deliveries from April. Revealed at the Geneva Motor Show in March, the cross-range special edition is available on All-New Duster, Logan MCV Stepway and Sandero Stepway. Sitting above the Prestige trim for All-New Duster and above the Comfort trim for Sandero Stepway and Logan MCV Stepway, the Techroad trim is offered exclusively in two new colours: Fusion Red and Highland Grey.

On the outside the Techroad editions on the Sandero Stepway and Duster feature special side decals with a grey and red motif and red detailing on the door mirror housings. A red centre cap also features on the new two-tone 16-inch ‘Flex Expression’ wheels for the Stepway models and 17-inch diamond-cut alloy wheels on Duster. Special Techroad badging can also be seen on the bodywork on all three models.

On the inside the Techroad boasts unique upholstery; the seats are recognisable thanks to their red and grey detailing and stitching, plus the ‘Stepway’ and ‘Duster’ logos embroidered into the fabric in the same colour on the respective models. The same red detailing is on show throughout the cabin, including on the air vents, around the gear lever and the door handles and even the front and rear protective mats.

Techroad editions are priced from £11,660 for the Sandero Stepway, £660 more than the equivalent Comfort version, and from £13,160 for the Logan MCV Stepway, just £665 more than the equivalent Comfort spec. The Techroad is available with the TCe 90 petrol engine on both Stepway models as well the highly efficient Blue dCi 95 diesel engine on Logan MCV Stepway.

The All-New Duster Techroad is priced from £16,360, £660 more than the equivalent Prestige model, and is available with both the TCe 130 and 150 turbocharged petrol engines, as well as the Blue dCi 115 diesel engine in 4x2 and 4x4 configuration.

Dacia has a long history associated with Renault, the French brand first working with Dacia plants in Romania in the 1960s, before acquiring them fully in 1999. The brand concept is simple: to shake up preconceived ideas. Dacia produces spacious, robust, high-quality vehicles of original design that are affordable for everybody.

Dacia vehicles offer exceptional value for money. Reliable and resistant, they embody the best of Renault expertise. Relaunched by parent company Groupe Renault in 2004, the Dacia range has been expanding constantly and buyers have a wide array of vehicles to choose from, ranging from Dacia Duster, a sporty all-terrain vehicle, to family vehicles such as the Dacia Sandero and Dacia Logan MCV. The concept continues to enjoy great success with over 5 million Dacias sold in Europe since the brand’s revival in 2004.

Dacia launched in the UK in January 2013 and enjoyed the most successful start ever for a new car brand in the UK. Dacia was named as the most recommended car brand in 2018 in a list compiled by YouGov in its BrandIndex, beating 34 other manufacturers. Dacia was also named Best Value Brand at the Auto Trader New Car Awards 2018, voted for by 43,000 real UK car owners. Dacia was one of only four out of 36 manufacturers to receive five-star reliability ratings in the 2017 Which? Car Survey, outperforming many well established and premium brands. The Dacia Sandero has been awarded the title of “Best Small Car under £12,000” by What Car? for seven consecutive years (2019, 2018, 2017, 2016, 2015, 2014, 2013). More than 140,000 Dacia vehicles have been sold in the UK to date.