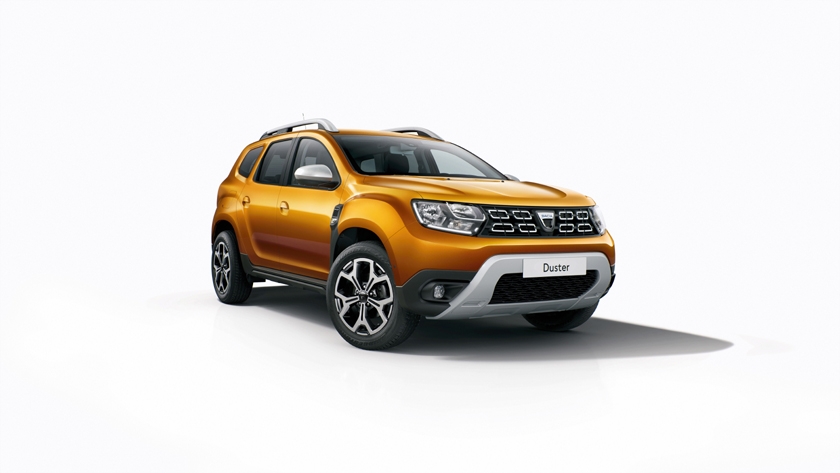 Boulogne-Billancourt, August 30, 2017 – Dacia has renewed Duster, the brand’s iconic SUV which boasts modern, all-new robust styling. Not only is All-New Duster as versatile as ever but it is also even more attractive and, with more than one million unit sales to its credit to date, a new chapter in the model’s history is about to begin. Dacia will unveil All-new Duster at the 2017 Frankfurt Show.

All-new Duster’s adventurer pedigree and ability to stray off the beaten track are expressed by the latest version’s updated design. In keeping with the model’s DNA, All-new Duster combines robust, muscular styling with a truly assertive personality that is emphasised by a brand-new body colour, Atacama Orange.

Having sold in over two million units (Renault & Dacia) since launch, Duster, a vehicle with an international calling, has become one of the Group’s top-selling models. Dacia's SUV has made its mark on the segment. In seven years, it has won over customers looking for a versatile, reliable and affordable vehicle. Duster's powers of attraction are practically limitless. Its highly attractive price, top-level off-road abilities, robustness and design leave no-one indifferent. Read on to find out more about a revolutionary model that has carved out a special place in the wide world of SUVs.

Marketing an SUV at the price of a city car was a bold move. When Dacia made that move in 2010, it hit on a major success. The theme of affordability was the focus of the Duster ad, in which a somewhat caricatural couple ask about the price of Duster after test driving it. When told that prices start at €11,900, the customer is offended: "You don't think we're going to spend so little?" The Dacia Duster phenomenon was born. The model sold in over 450,000 units in three years. Building on that success, the brand launched a restyled Duster in 2013 that met with the same enthusiasm, the car’s now enviable popularity being expressed from 2016 on in the advertising slogan, “Another one drives a Duster”.

Duster's price was clearly important at a time of economic crisis, but the car's success cannot be reduced to its attractive price alone. The model's intrinsic all-terrain qualities have also contributed largely to its success. The car's design leaves no room for doubt as to its SUV nature. Without being over the top, the styling is that of a true 4WD model. The front end exudes a sense of robustness. The wide, curvaceous wings, double light units and protective bumper clearly express the car's SUV DNA. The raised ground clearance, large wheels (16") and multiple protective features invite drivers to venture out on the toughest roads and tracks. The interior is equally outstanding, with a modern, functional and modular cabin. And the impertinence of Dacia's SUV does not stop there, as it features C-segment equipment at B-segment prices.

As with all Dacia models, Duster targets customers looking to buy a fairly-priced car, an affordable vehicle with the equipment responding to their needs. In addition to its affordability, the brand moved into a new territory: the SUV market. This served to win over new customers looking for a car with real all-terrain abilities. These new customers include first-time buyers and those who would otherwise have bought a used car. With a new market and new customer base, the Dacia brand is perpetuating its success and even bringing together its own community. The Dacia community organizes picnics that every year draw thousands of people in many of the brand's countries. Dacia customers are true fans, highly active in the social networks. More than simple customers, they are the brand's best ambassadors.

Dacia, out to conquer the worldDuster was created in response to a simple observation: a true need exists worldwide for roomy, robust and affordable 4x4 cars. But at the time that need was mostly unfulfilled. Which is why Dacia came up with a world first and developed an SUV primarily targeting developing markets. The needs of European motorists were also taken into account from the start of the project.

Launched initially under the Dacia brand, Duster was marketed with the Renault badge in 2011 in Latin America (including Brazil, Argentina, Mexico, Chile and Colombia) and subsequently in Russia and India. Under the Renault brand, Duster is a true image driver. It targets motorists looking for a prestigious SUV with real off-road abilities. The European version of Duster has been adapted to respond to the specific expectations of international customers, including an "extreme cold" version for Russia, a flex-fuel model for Brazil, and a right-hand-drive model with a special design for India.

Designed to take on all types of roads and tracksDuster was available from launch in not one but two versions:

Duster is eminently user-friendly. The car's weight (1,160 kg for the 4x2, 1,250 kg for the 4x4) combined with its compact dimensions make it particularly agile.The subframe is adapted to all-road and all-terrain use thanks to:

The all-terrain and handling qualities of Duster are fully put to the test in renowned motorsport competitions, including the Trophée Andros (France), the Rallye des Gazelles (Morocco) and the Pikes Peak International Hill Climb (USA). Just a few days before launch, Dacia Duster finished first in the Rallye Aicha des Gazelles in the Crossover category, demonstrating its all-terrain qualities and its robustness and reliability. The same applies to the motorsport version of Duster as driven by Alain Prost on the ice tracks of the Trophée Andros in winter 2009/2010. Duster came second in the overall standings after the seven races of the season. Duster took on a new challenge in 2011, setting out to tackle the Pikes Peak International Hill Climb. Its first participation in the legendary race was fairly impressive, with Dacia Duster No Limit finishing third.Duster today is marketed in some 100 countries under the Renault and Dacia brands. In seven years, Duster has proved an immense success, selling in over two million units worldwide.

The Duster story is set to continue in 2017 with the reveal of New Duster at the Frankfurt Motor Show on September 12.