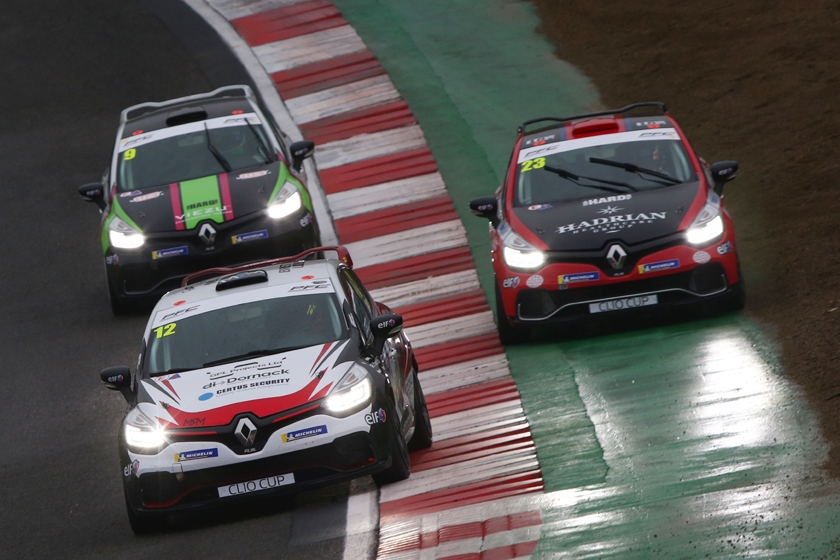 Donington Park, a circuit that has produced some of the closest finishes in recent Renault UK Clio Cup history, hosts the championship’s latest action of 2019 this weekend (Sat 27/Sun 28 April) when two more highly unpredictable endings could be in store…

As ever, the ITV4 and ITV4 HD television channels will provide comprehensive live coverage of the event’s main race day on Sunday which also includes the latest rounds of the headlining British Touring Car Championship. Meanwhile a mammoth trackside crowd of over 35,000 people is expected to pack into the venue, adjacent to East Midlands Airport on the Derbys-Leics border.

Both Clio Cup races – rounds three and four of the 18-round season – take place on the Sunday. The first is at 10:05; the second 15:45 with full live coverage on ITV4/ITV4 HD also being simulcast by ITV.com/BTCC to mobile devices.

However the teams and drivers will first take to the track today (Thursday) for two timed free practice sessions. These will receive updates including live video on the Clio Cup’s popular Twitter, Instagram and Facebook pages.

Leading the standings after winning both the season’s opening rounds at Brands Hatch is Team HARD’s Max Coates (Scorton, North Yorks) but his closest challenger, MRM’s Jack Young (Belfast), will surely be out for revenge after a time penalty denied him a victory in one of the two races at the Kent circuit.

The pair ran nose-to-tail and side-by-side for much of the time at Brands and at Donington, a circuit famed for its slipstreaming tactics, more of the same is anticipated between the pair.

Indeed in recent years Donington has witnessed two of the tightest finishes ever seen in the championship: in 2015 four drivers fighting for the win – eventually headed by current BTCC superstar Ashley Sutton – crossed the line covered by just six tenths of a second; last year James Dorlin, now a factory McLaren GT driver, survived a gravelly moment at the final bend to pip Bradley Burns for victory by a mere three tenths.

While Coates and Young lead the way arriving at Donington in 2019, they will still need to overcome some serious opposition if they want to keep the momentum going.

Third, fourth and fifth in the table are MRM’s Brett Lidsey (Northfleet) and Team HARD pair Jade Edwards (Northampton) and Ethan Hammerton (Northallerton). Lidsey and Edwards were strong at Donington 12 month ago; on Sunday, Edwards’s car will carry ITV Sport’s on board camera.

Adding to Team HARD’s numbers this weekend and for the remainder of the season is the highly rated Jamie Bond.

After a 1-2 finish with its cars on the road at Donington last year, Westbourne Motorsport will be keen to return to front-running form after tough time in the Brands Hatch opener. Ben Colburn (Worthing), Aaron Thompson (Lutterworth) and Finlay Robinson (Harrogate) all impressed with their pace and antics there, but will want to score big this weekend after being thwarted by some unfortunate events…

Elsewhere, returning to the circuit where he made his debut 12 months ago, Luke Warr (Sudbury) will be looking for more improvements after achieving a personal best result of ninth at Brands.