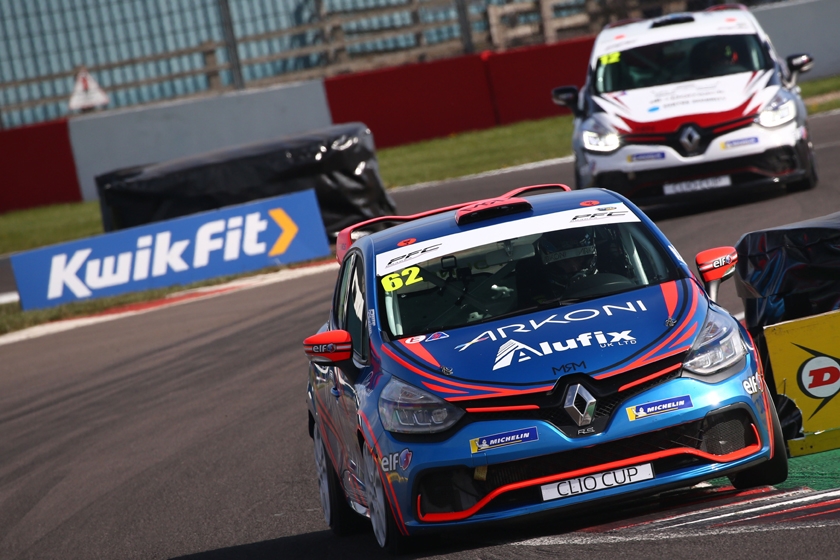 Jack Young (Belfast) has become the youngest winner in Renault UK Clio Cup history after taking victories in both rounds at Donington Park (27-28 Apr) – results that have moved him into the championship lead.

Behind there were more celebrations as Westbourne Motorsport’s Ben Colburn (Worthing) took his first podium finish in third. But there was disappointment for Max Coates (Scorton) who, having arrived at Donington leading the standings, retired from the race in his Team HARD car.

In race two – broadcast live by free-to-air TV channels ITV4 and ITV4 HD – Young was again unstoppable as he romped home to win by over nine seconds.

Lidsey took another solid second while Coates this time was able to rescue a third place finish after starting from the pit lane. However it was not enough to stop Young and Lidsey moving past him at the top of the table, although next up are Coates’s home rounds at Croft Circuit in North Yorkshire (15-16 June).

MRM’s pair of 1-2 results, meanwhile, has enabled it to open up a 25-point lead at the top of the Entrants Trophy standings over Team HARD. Young is a commanding leader of the Graduates Cup for younger drivers…

Elsewhere at Donington there were strong showings from a number of other drivers, notably Team HARD’s Jamie Bond (West Malling) who impressed mightily with a fourth place finish and the fastest lap of all on his debut in race one.

Westbourne Motorsport also had much to be optimistic about with Colburn’s podium result plus improved pace shown by his team-mates Aaron Thompson (Lutterworth) – who ran in third for much of race two – and Finlay Robinson (Harrogate).