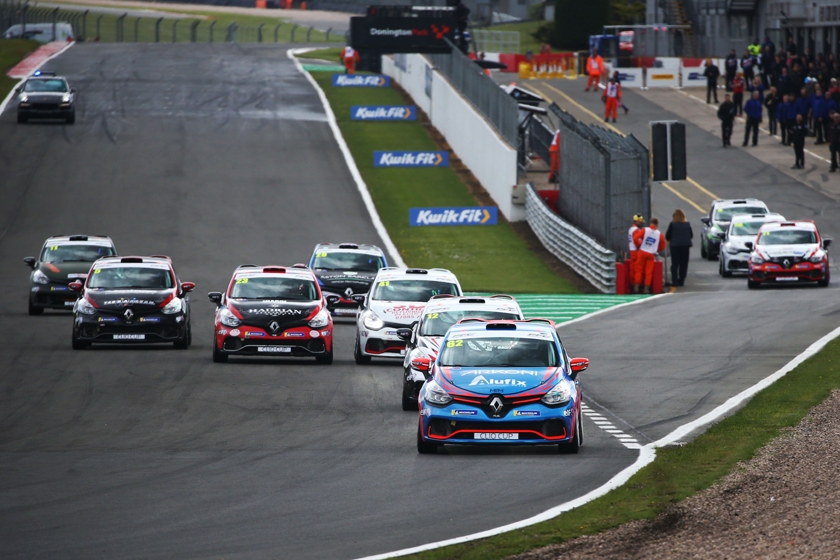 After a lengthy break, the Renault UK Clio Cup’s 2019 season resumes in just over a week (Sat 15/Sun 16 June) with its latest two rounds at one of the most daunting circuits on the calendar – Croft in North Yorkshire.

The circuit is regarded by drivers as one of the toughest to crack thanks to its technical lay-out which comprises low, medium and high-speed corners.

Many predict that a new track surface will lead to record speeds being achieved around Croft’s 2.125-miles. It will be interesting to see if the Clio Cup’s 15-year-old race lap record there – Jonny Adam’s 1m31.509s set, astonishingly, in 2004 – can finally be broken.

Over 30,000 people are expected to descend on Croft for the event – the biggest motor sport fixture by far for the North East of England. Headlined by the British Touring Car Championship, the venue will also be under the glare of ITV Sport’s cameras which will broadcast the action live throughout Sunday on ITV4.

Leading the Clio Cup standings arriving at Croft are MRM team duo Jack Young (Belfast) and Brett Lidsey (Northfleet). Both have been on the podium in all four rounds to date with 17-year-old sensation Young winning twice last time at Donington Park to go top of the table

However, Young and Lidsey will be aware that Croft is home territory for one of their biggest rivals, Max Coates. Having won the season’s opening two rounds at Brands Hatch, the Scorton racer suffered a troubled time at Donington – now down to third in the championship, he will be aiming to recover lost ground on a track on which he has won twice before....

In addition to Coates, his Team HARD team-mate Ethan Hammerton (Northallerton) and Westbourne Motorsport’s Finlay Robinson (Harrogate) are also local to Croft and each will surely revel in their first event on this scale in front of their home crowd.

Joining Coates and Hammerton in Team HARD’s line-up are Jade Edwards (Northampton) and Jamie Bond (West Malling). Both have an impressive fourth-place finish to their names already this season and can be expected to challenge for podium results.

Likewise, Robinson’s Westbourne team-mates, brothers Ben and James Colburn (Worthing) – Ben’s confidence in particular will be on a high after he took his first top-three finish at Donington. James, a former championship runner-up, makes one of several anticipated outings for Westbourne (of which he is also joint Team Principal)!

Another who will be feeling confident after his most competitive showing yet at Donington is Specialized Motorsport’s Luke Warr (Sudbury).

Unable to contest the season’s first two events, the rapid Nathan Edwards (Tunbridge Wells) adds to MRM’s numbers on his return to the grid.

When to watch…
The Clio Cup’s drivers will be first on track at Croft on the Friday (14 June) with two free practice sessions. Timed qualifying takes place 11:20-11:50 on Saturday followed by the first of the weekend’s two races (round five) later that afternoon at 16:25. Race two (round six) at 15:50 on Sunday will receive live coverage on ITV4 and also be live-streamed to mobile devices via ITV.com.