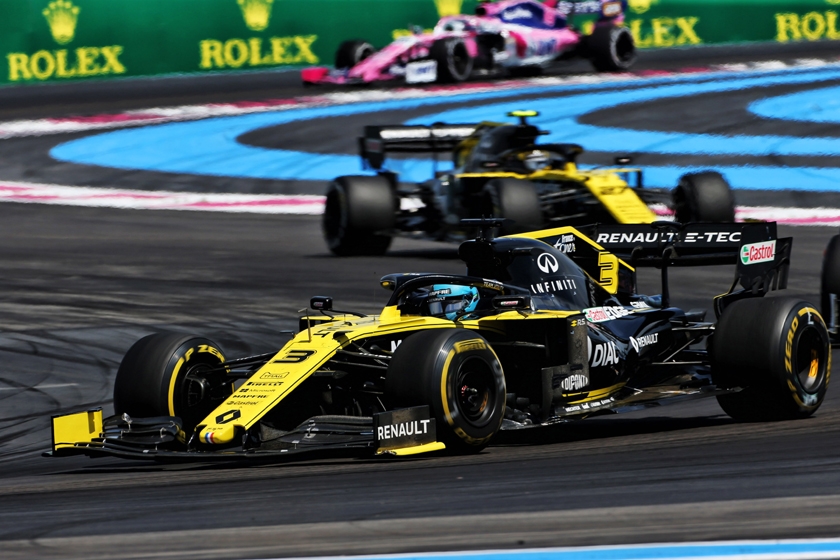 Renault F1 Team finished the Pirelli French Grand Prix with Daniel Ricciardo seventh and Nico Hülkenberg ninth, however, a post-race penalty for Daniel meant he exited the points, which promoted Nico to eighth.

Daniel had started from eighth on the grid but fell down to tenth on the first lap. An early stop on lap 16 to move from the Medium to the Hard tyre gave him ammunition to fight back up the field, taking the Toro Rossos and hunting down the McLarens. He closed on Lando Norris in the final stages of the race and made a move on the last lap, but a 10-second time penalty for overtaking both Norris and Alfa Romeo’s Kimi Räikkönen outside the track limits pushed him down to eleventh position in the final classification.

Nico had a hard-fought race to finish ninth at the flag. Starting from thirteenth on Hard tyres, he made an excellent start and was locked in a battle with Räikkönen for tenth. A late stop for Mediums did not yield a chance to overtake the Finn and he came home ninth, which later became eighth after Daniel’s penalty.

"We made a good recovery today and it’s pleasing to be in the top ten again. Maybe it could have been a different race had we qualified slightly higher, but thirteenth to ninth is a strong effort. I was pushing all race, but I was stuck in traffic and this place is difficult for overtaking. I had pace in hand today, which shows on race day we’re strong. The last few laps were really fun; it was tight and exciting and I was happy to make up some places there. We’ve demonstrated that our race pace is there, but we have something to find on one-lap pace."

"It’s clearly disappointing to drop outside the points with a post-race penalty, especially at the team’s home race. The last lap was a lot of fun, we had a fight and I enjoyed it. I’d rather give it a go than not try at all, and I’m sure the French fans and the people at home liked watching. It’s a shame to be penalised for it, but we’ll aim to move on from that as quickly as possible. In terms of the race, I feel like I missed out a little bit at the start, especially after a really good launch off the line. I braked too early for turn one and that was too conservative looking back. That made the rest of the race hard work, but we kept it clean and smooth from there. There are still a lot of positives to take and we’ll be looking for an immediate response in Austria."

*Finished seventh on track, but a ten-second penalty pushed him back to eleventh

*Finished ninth on track, but was promoted to eighth post-race

"The Renault-engined cars certainly tried to bring this Grand Prix to life. With P7 and P9, I think we finished in the best positions at the flag considering our starting positions and I am sure that’s what the fans will take away. Daniel didn’t have the best of starts but fought back thanks to a well thought out strategy and aggressive drive. Nico stayed on Kimi’s gearbox throughout the race and was quicker, but not enough to make a move stick. The 10 second-penalty imposed to Daniel means that he dropped out of the points. It is disappointing as it was probably the most thrilling point of an otherwise uneventful race, with four great drivers fighting safely and fiercely in the last corners. With all the challenges to overtake cars on-track it is another demonstration that qualifying is the defining part of the weekend and our focus point for improvement."