A lot at stake at the Nürburgring 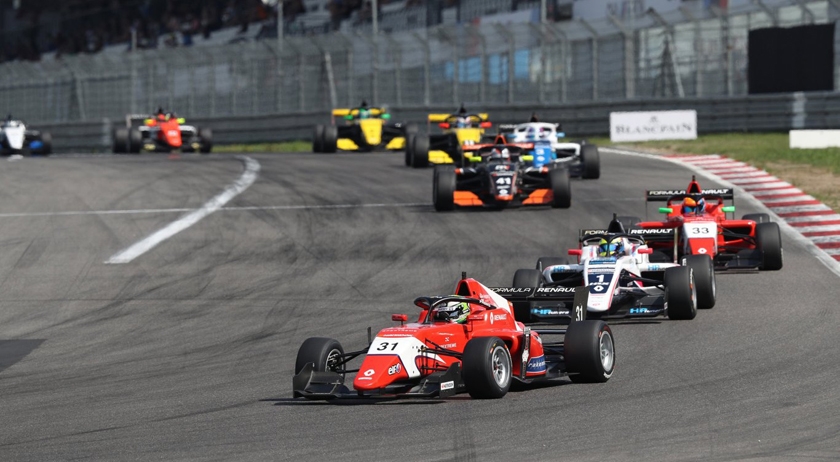 Refreshed after a short summer break, the Formula Renault Eurocup drivers and teams are preparing for their return at the Nürburgring. The German track, which will once again host F1 in the Eifel Grand Prix, will kick off a particularly intense period with six races in less than four weeks.

Chalk-full of surprises and plot twists, the debut of the 50th season in the history of Formula Renault set the foundation for an extremely wide-open campaign. Representing a proper technical challenge, the legendary Nürburgring could allow certain protagonists to pull away or others get their season back on track at the start of a very busy month of September which will then see them head to Magny-Cours and Zandvoort.

After equalling the 23 consecutive point-finishes of Stoffel Vandoorne, Caio Collet will have a chance to claim his first record in the Formula Renault Eurocup. The Renault Sport Academy driver will also have the advantage of returning to the track where he finished on the podium last year.

While Franco Colapinto and David Vidales will make their Nürburgring debuts, the former will seek a return to the podium while the latter will be watched closely by all observers following his perfect debut in single-seaters at Imola in July. Already leading the way among the Juniors, will the Spanish driver manage to repeat the feat to become one of the favourites for the title?

After the first two of ten meetings this season, nothing is yet settled as Alex Quinn (Arden Motorsport), William Alatalo (JD Motorsport) and Victor Martins (ART Grand Prix) are all just 25 points shy of the leader.

Alex Quinn returns to the track where he made a scintillating debut in the Formula Renault Eurocup with a fourth and second place finish last year. His experience could be a major asset, as it could be for Victor Martins, who scored a top three result in 2018. For his part, William Alatalo wants nothing more than to keep his momentum going after his two podium finishes at Imola at a circuit he will race on for the first time.

After finishing just off the podium at Monza, Tijmen van der Helm (FA Racing) will try to take his game to the next level to spray the bubbly for the first time and catch up to the group of leaders. Scoring points in three of the first races, Hadrien David (MP Motorsport) and Ugo de Wilde (Arden Motorsport) will have the same goal to restart a campaign more in line with their initial targets.

The top ten in the crosshairs

Following a start to the season not in line with his expectations, Amaury Cordeel (FA Racing) would like to make the most of his experience to return to the top ten in the general classification. After scoring their first points at Imola, rookie Paul Aron (ART Grand Prix) and the experienced Lorenzo Colombo (Bhaitech Racing) will also truly hope to launch their seasons in Germany.

After leaving Emilia Romagna empty-handed, László Tóth (Bhaitech Racing) and Grégoire Saucy (ART Grand Prix) will try to bounce back on a track they know quite well from their time in F4. The equation will be even simpler for Petr Ptáček (R-ace GP) and Reshad De Gerus (Arden Motorsport), whose objectives will be none other than a solid result to get back in the championship battle.

Lastly, Nicola Marinangeli, who was injured during the break, will be replaced by W Series racer Vicky Piria at Bhaitech Racing.

The two qualifying sessions and two races will be broadcast live on Saturday and Sunday on the Renault Sport Series Facebook page and Renault Sport YouTube channel.