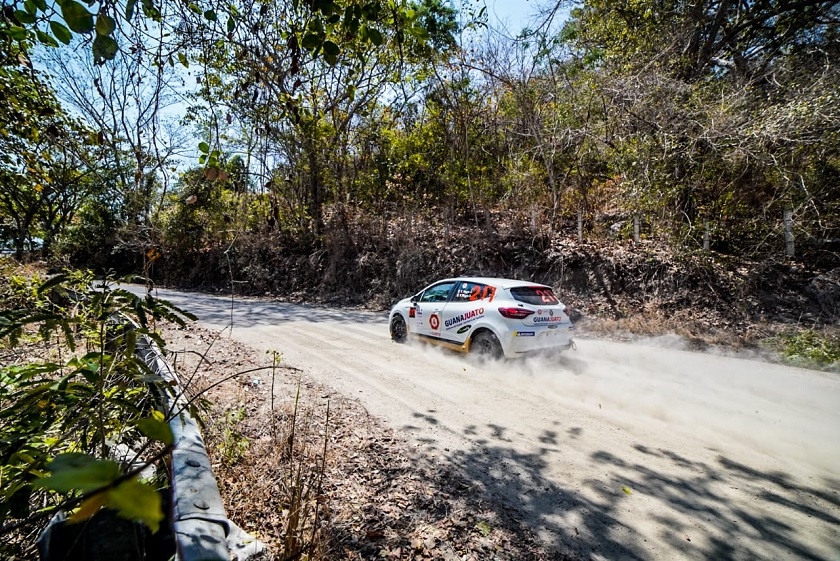 Twelve months after a victorious debut on Rally Guanajuato Mexico, Clio Rally5 returned to Mexico for the opening round of the NACAM Junior Cup held in conjunction with the NACAM Rally Championship.

Eight tarmac special stages totalling 92.25 kilometres were on the Colima Rally route for the first round of the season.

Gustavo Urióstegui set the pace in the opening stage before Rafael Maggio Rodriguez took the lead on SS2. The former leader answered back on the next two stages, but his rival was just 0.2s behind at the only service point of the rally.

The duel continued in the afternoon. Although Gustavo Urióstegui extended his lead to nearly one second on SS6, Rafael Maggio Rodriguez stormed back on the next timed sector to set the best time, which was enough for the win following the cancellation of SS8.

Rafael and Rodrigo Maggio Rodriguez went on for the win with a 7.5s margin of victory ahead of Gustavo Urióstegui. Consistent throughout the rally, Patrice Spitalier finished third ahead of Alejandro Pimentel and Gerardo Rejon Basañez.

Victorious in the NACAM Junior Cup, the Clio Rally5 of Rafael Maggio Rodriguez was also the highest placed two-wheel drive entry and finished fourth overall. In addition to this performance, Clio Rally5 once again demonstrated impressive reliability with all those entered finishing the rally.

The winner of the NACAM Junior Cup will receive an invitation to compete in a round of either the 2022 Tarmac or Gravel Clio Trophy France.

The Clio Ice Trophy will welcome Clio RX as well as the Rally and Cup versions fitted with the RX conversion kit for spectacular races on the ice with a four-round calendar from January to February 2022 at the Circuit Andorra Pas De La Casa.

With the fastest time in three of the four sessions, Hadrien David (R-ace GP) set the time to beat in 1:37.954s ahead of rookies Gabriele Minì (ART Grand Prix) and Isack Hadjar (R-ace GP), who both clocked in at 1:37.996s. The top 23 drivers were separated by less than a second after the tests.

The Formula Regional European Championship by Alpine certified by the FIA field head to Circuit de Barcelona-Catalunya for the second pre-season collective tests Thursday and Friday.