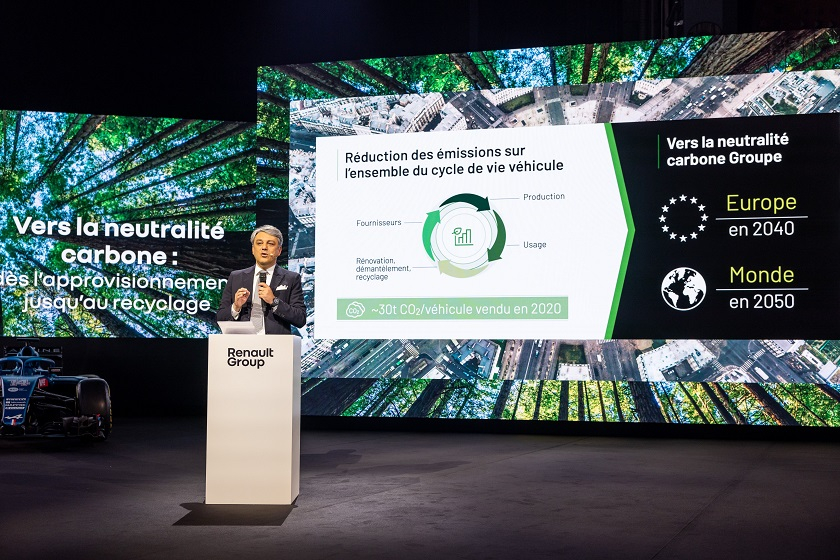 With the backing of the Board of Directors, Renault Group outlined its CSR policy roadmap and the role it will play within the Renaulution strategy at the Annual General Meeting on Friday, 23 April 2021. An ambitious policy, based on the rolling out of new mechanisms, it will help the Group realise its transformation strategy and reach its performance objectives. The policy builds on three major pillars that are deeply integrated into the company’s business: the ecological transition, the safety of customers on the road and employees in the workplace, and inclusion by improving employability and having more women in the workforce.

"We consider our environmental and societal responsibility as one of the chapters of Renaulution. Our commitments to reduce our carbon footprint, to the safety of people who use our vehicles and of employees in the workplace, and on inclusion meet our strategic challenges and support value creation. Developed with the company’s teams, and according to our values of innovation and solidarity, this action plan is supported by a group of executive committee members and will be fully integrated into our activities. These commitments embody our Purpose while contributing to the Group’s transformation." Luca de Meo, CEO of Renault Group.

In addition to commitments made on vehicle electrification, with electric vehicles accounting for 65% of sales by 2025, and 90% in 2030 for the Renault brand in Europe, the Group aims to achieve carbon neutrality in Europe in 2040 and worldwide in 2050.

Since 2005, the Group has been committed to reducing the environmental footprint of its vehicles throughout their entire life cycle and is ramping up efforts to become carbon free with measurable targets for 2025 and 2030*. New ecological transition initiatives include:

* Renault Group is currently issuing its first climate report. The report outlines the Group’s ambition for carbon neutrality, with key actions and commitment milestones for 2025/2030. It applies guidelines issued by the Task Force on Climate-Related Financial Disclosures (TCFD). Access to the full document here

To help reduce the number of road accidents, the Group provides a clear response based on two key aspects: preventing accidents and assisting emergency services. The preventive safety program operates in three areas:

Lastly, to reduce emergency response time and give emergency services easy vehicle access in the event of an accident, the Group has also developed two major innovations, which will be rolled out on all future releases in Europe:

As vehicles become more and more electric, connected, and are fitted with on-board smart systems, new skills are required. In light of the fundamental shifts throughout the industry, the company’s inclusion policy will rest upon 3 pillars: employability, parity, solidarity.

The Group is set to inaugurate a tertiary education centre dedicated to the learning of new skills in electrification, data management, analysis and cybersecurity, and the circular economy, including engineering related to the recycling of vehicles and their batteries. The ReKnow University, initially aimed at Group employees in France, will train nearly 40% of the workforce affected by these changes by 2025. The program will gradually phase in industrial and academic partners with whom the Group pools together efforts on vocational training design and dissemination.

While Renault Group has the largest proportion of female employees compared to other vehicle manufactures, women still only account for 25% of its workforce. The Group is setting bold targets for gender balance, that will be reached through the following initiatives:

Developing inclusive mobility for all: mobility can be a primary source of inequality and a barrier to stable employment in some areas. It is an essential part in getting, keeping, or training for a job. As such, since 2012, the Group has worked with the support of the Renault solidarity garages to foster a partnership with Pôle Emploi (French job-seekers agency) and the Adie microcredit agency to provide unemployed people – who are unable to contract a bank loan – with a new leased vehicle. The 2025 target is to increase the number of beneficiaries tenfold – from a few hundred to a few thousand – by mobilizing its network and vehicles from the Factory VO.

As part of its latest missions, the Renault Foundation and the worldwide foundation network also support initiatives that help those who have been out of stable employment find a job, by focusing their efforts on local job markets around the Group’s locations and by giving employees the opportunity to be active partners in the program. To learn more about the Foundation: https://group.renault.com/groupe/la-fondation-renault/.

In an effort to incorporate the CSR strategy into the heart of the company’s primary operations, a CSR Strategy Executive Committee has been created and includes representatives from the highest echelons of the Group’s key functional divisions: Industry, Purchasing, Engineering, and Human Resources. All decisions will be presented to and approved by the CSR Committee of the Board of Directors, chaired by Jean-Dominique Senard, Chairman of Renault ‘s Board of Directors.