The First Inter-Group Battles at Magny-Cours 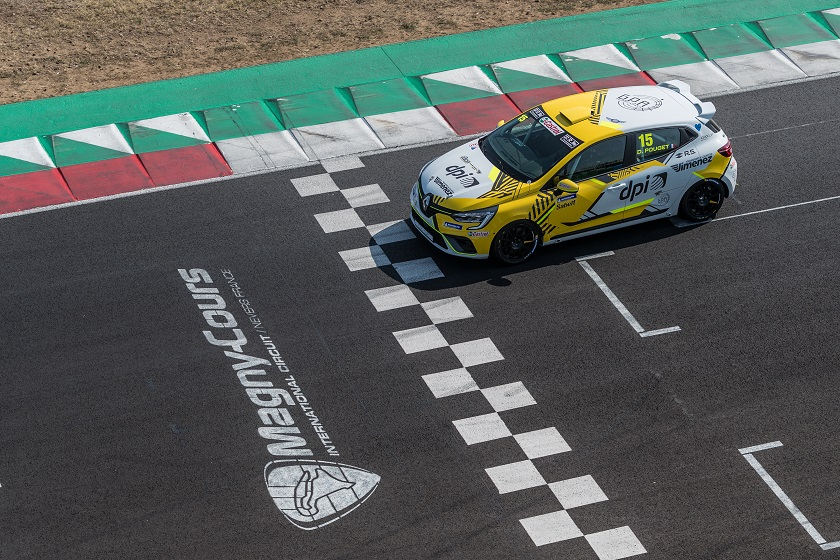 Round three of the Clio Cup Europe will honour the category’s new format on this Europe Day weekend with nearly forty drivers entered for the first direct battle between two series (Group B and Group D).

The pace is quickening for the protagonists of the Clio Cup Europe. Just a few days after putting on an exceptional show at Monza, many competitors will get back behind the wheel at the former home of the French Formula 1 Grand Prix. The stakes will be even higher as two groups will share the same date on the calendar for the first time this season !

David Pouget (GPA Racing), who is the only repeat winner so far, will look to confirm his form after victories at Nogaro and Monza.

Despite his ambitions, the leader will have his work cut out for him. Four of his rivals can take the lead in the general classification : the Milan Compétition drivers Anthony Jurado, Nicolas Milan and Marc Guillot and his team-mate Kévin Jimenez.

Meanwhile, Dorian Guldenfels (TB2S) and Mickaël Carrée (T2CM) will aim to make up for lost ground and consolidate their top-ten positions, but they will also have to keep an eye on the Group D stars led by Jordi Palomeras (GPA Racing). Three times runner-up and five times third in Clio Cup Spain, the Catalan is preparing to challenge the French drivers on their home ground.

With already three wins in the Challengers Cup, Kévin Jimenez is eager to widen the gap to his adversaries. While his two closest rivals are skipping Magny-Cours, the Frenchman will still have to be wary of Alexandre Albouy (GPA Racing) and Mickaël Carrée, both of whom are in a position to dislodge him from the leadership of the category in Burgundy.

In the Gentlemen Drivers Cup, Lionel Viguier (TB2S) will have the opportunity to regain the lead in the category. It promises to be an intense battle as he is just three points ahead of Franck Horn (GPA Racing) and less than twenty to the good from Laurent Dziadus (Team Lucas), Javier Cicuendez (Team VRT) and Jérémy Bordagaray (Team Borda Rallye)... Not to mention the influx of several savvy experienced Spanish competitors !

The battles promise to be wide-open in this first round for the group that will race at Magny-Cours, Alcañíz, Lédenon, Valencia and Barcelona.

Long-time Clio Cup Spain campaigner, Jordi Palomeras will be one of the favourites and he will yet again have to contend with team-mate David Pouget and rival Nicolas Milan, both of whom have decided to take on the challenge of competing in both Group D and Group B.

Already in the field at Nogaro, Juan Carlos Hernandez (Chefo Sport) will try to set the pace in the Challengers Cup, where he will meet up with long-time rivals Nicolas Abella (Chefo Sport) and Adrian and Alejandro Schimpf (Cota Automoción). The fight for the win promises to be spectacular as Ivan Riera (Chefo Sport), Eric Zabala (Team VRT), Daniel Nogales and Alex Lahoz (Cota Automoción - Team VRT) are also determined to show well in the season-opener.

In the Gentlemen division, Spaniard Javier Cicuendez and Dutchmen Stephan Polderman (Chefo Sport) and René Steenmetz (Chefo Sport) will make the most of their track time at Nogaro to have the edge over Joaquin Rodrigo (Vearsa Sport) and Gabriel Alonso (GPA Racing), who are starting their season in Burgundy.

While they are ready to challenge the French on their turf, the latter will reciprocate in their group. Guillaume Maio (GM Sport), Mathieu Lannepoudenx (Milan Compétition) and Alexandre Albouy have chosen to enter the Challengers in Group B, as has Franck Horn in the Gentlemen category.

After the first meeting at Nogaro, the initial trends have emerged in Group B. While Nicolas Milan currently leads David Pouget by nine points, the duel at the top promises to be thrilling between these two drivers who will be racing in three different categories !

However, they will have to make sure that they don’t overlook their closest pursuers - Kévin Jimenez, Dorian Guldenfels and Anthony Jurado - or some others determined to reduce the gap, such as Thibaut Bossy (TB2S).

If he is to repeat his brace of wins in the Challengers at Nogaro, Kévin Jimenez will have to contend with Alexandre Albouy, Mathieu Lannepoudenx and Mickaël Carrée. After his debut in the Clio Cup, Polish driver Jerzy Spinkiewicz (Uniq Racing) will be aiming for his first podium, as will Paul Cocaign (TB2S) and Guillaume Maio (GM Sport).

Also contesting their second round this season, Spaniard Juan Carlos Hernandez and Frenchman Antoine Bordagaray (Team Borda Rally) are keen to take a step forward and demonstrate their improvement by getting closer to the sharp end of their category.

In the Gentlemen category, Lionel Viguier’s situation is relatively similar to that of his position in Clio Cup Europe with a slight lead over Franck Horn and Laurent Dziadus, a trio that Arnaud Gautier (T2CM), Javier Cicuendez and Jérémy Bordagaray hope to beat this weekend.

Meanwhile, Fabien Julia (LR Performance), Michel Faye (GM Sport), Stephan Polderman and René Steenmetz hope to reduce the gap that separates them from the category top-three. Lastly, Guy Frey (T2CM) makes his return to the Clio Cup after a more than three-year absence.