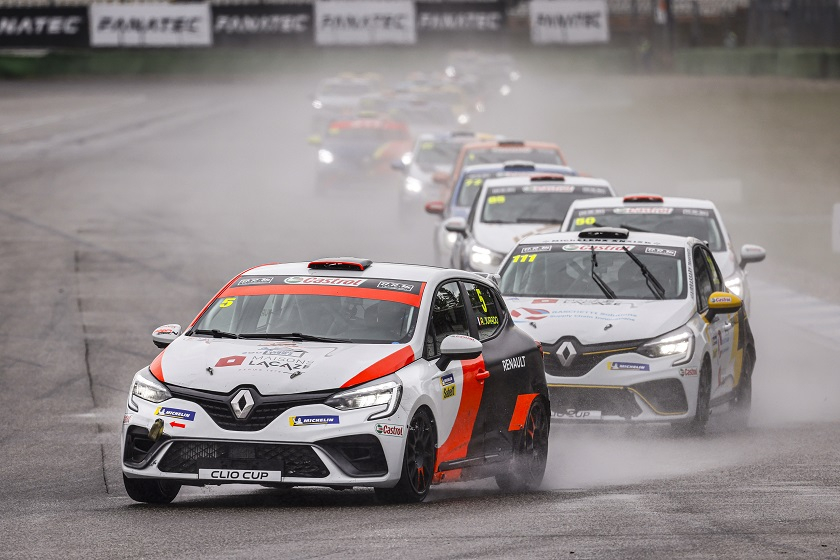 Once again, the victory wasn’t decided until the waning moments of the Clio Cup Europe ! Seventh at the start, Anthony Jurado (Milan Compétition) becomes in Hockenheim the fourth different winner this season by pushing poleman David Pouget (GPA Racing) into a mistake on the last lap. Tomáš Pekař (Carpek Services) completed the podium while Jerzy Spinkiewicz (Uniq Racing) and Laurent Dziadus (Team Lucas) respectively won in the Challengers Cup and Gentlemen Drivers Cup.

While the TB2S team dominated the collective tests, first with Thibaut Bossy, then Dorian Guldenfels, the hierarchy changed in qualifying that was more competitive than ever on Friday.

The drama began even before the start on Saturday, with a deluge falling over Hockenheim while the competitors were setting up on the grid. The majority of the drivers took advantage of the time allowed to switch to the Michelin rain tyres.

Despite the end of the showers, the first formation lap was marked by the loss of a wheel to the car of Nico Abella (Chefo Sport) before the second formation lap saw Henrik Seibel (Shlaug Motorsport) get caught out by the conditions in the penultimate corner.

When the lights went out, David Pouget held on to the lead as Nicolas Milan moved up to second place before going wide and losing position to Anthony Jurado and Mathieu Lannepoudenx. The action was just as intense in the midfield with Kévin Jimenez (GPA Racing) and Tomas Pekar quickly getting past Thibault Bossy.

At half-distance, Anthony Jurado bridged the gap to David Pouget under the watchful eyes of Nicolas Milan and Kévin Jimenez, who got around Mathieu Lannepoudenx on lap six, but these three drivers were all penalised ten seconds for track limit abuses.

After two unsuccessful attacks at the end of the Parabolika, Anthony Jurado took advantage of a mistake by David Pouget at the same corner on the final lap to take the lead and score his first Clio Cup Europe success of the season. After the enforcement of penalties, Czech Republic’s Tomáš Pekař completed the podium ahead of Thibaut Bossy, Marc Guillot and Nicolas Milan.

Poland’s Jerzy Spinkiewicz finished seventh and inherited the victory in the Challengers Cup from Alexandre Albouy (GPA Racing) and Kévin Jimenez, who dropped to tenth place behind Laurent Dziadus. The latter won the Gentlemen Drivers Cup ahead of the Bordagaray brothers Jérémy and Thomas (Team Borda Rally).

Despite his error that cost him the victory, David Pouget extends his lead in the general classification from Nicolas Milan while Anthony Jurado moves back into the top three. Kévin Jimenez still leads the Challengers Cup, but Alexandre Albouy and Jerzy Spinkiewicz continue to make up ground. Lastly, Laurent Dziadus has put more daylight between himself and his closest rival "Horn" (GPA Racing), who finished just sixth in the Gentlemen Drivers Cup.

Also victorious in Group B thanks to his overtake of David Pouget on the last lap, Anthony Jurado is back in contention in the general classification after the leader, Nicolas Milan, was demoted to fourth place post-race behind Thibault Bossy.

The gaps have shrunk among the Challengers, where Jerzy Spinkiewicz takes the win over Alexandre Albouy to take precious points away from Kévin Jimenez, who finished third today. Laurent Dziadus came up big in the Gentlemen category with his third consecutive win of the year ahead of Jérémy Bordagaray and René Steenmetz (Chefo Sport), who set the fastest lap in the race as he was the only driver to gamble on slick tyres.

In this first race of the season for Group C, Thibault Bossy took control in qualifying but Tomáš Pekař surprised him on lap three before going on to victory. Marc Guillot (Milan Compétition) completed the podium.

With the fastest time in the Challengers category, Jerzy Spinkiewecz (Uniq Racing) took a comfortable win ahead of Mariano Alonso (GPA Racing) and Paul Cocaign (TB2S). Lionel Viguier (TB2S) did the same in the Gentlemen category.

The Clio Cup Europe will be back in action this afternoon for race two of the weekend at 15h40.