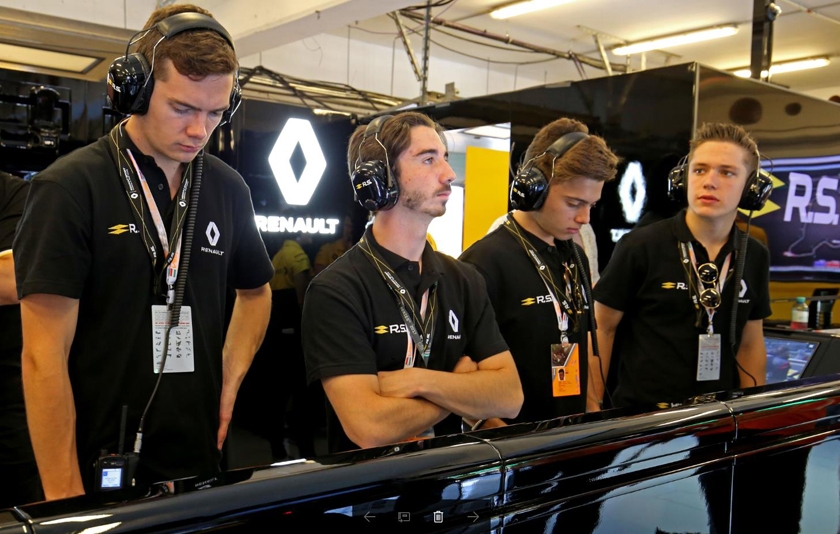 Once again, this year Renault Sport Racing invited the Formula Renault Eurocup leaders to the paddock of the Formula 1 Hungarian Grand Prix over two days. Four drivers were on hand to explore the surroundings of the world championship, meet key personnel from the Renault Sport Formula One Team and Renault Sport Academy and enjoy a behind the scenes F1 visit.

This year, the annual operation led by Renault Sport Racing with the Renault Sport Formula One Team and Renault Sport Academy allowed Sacha Fenestraz, Will Palmer, Gabriel Aubry and Max Fewtrell to check out the F1 from the inside within the context of a Grand Prix.

Over two days, the group was treated to a special welcome by the Renault Sport Formula One Team. Hosted in the motorhome, all four got the chance to speak directly to Nico Hülkenberg, Jolyon Palmer and Sergey Sirotkin.

The young F1 aspirants also met with race team manager, Paul Seaby as well as Nico Hülkenberg’s physical therapist, Martin Poole before an in-depth and detailed visit to the garage and the teams strategic areas.

Closer to their dream and ultimate goal, they watched the first free-practice of the Hungarian Grand Prix from the garage and had the privilege to sit in on the debriefing between the drivers and their engineers.

The future is now

On Thursday, the four drivers completed their day in the FIA F2 and GP3 paddock in the company of Renault Sport Academy Manager, Mia Sharizman. They ran into familiar faces, like 2015 title winner Jack Aitken, 2016 runner-up Dorian Boccolacci as well as some of the team managers from the teams competing in the next rung on the motor racing ladder.

On Friday, they spoke with Cyril Abiteboul. The Renault Sport Racing Managing Director openly and without reservation answered all their questions while also offering important advice for the next stage of their careers in reminding all of them the expectations of a team like Renault Sport Formula One Team.

Sacha Fenestraz (Josef Kaufmann Racing): “I never thought I would spend my 18th birthday with the Renault Sport Formula One Team at a Formula 1 Grand Prix! It is truly fantastic and I really want to thank Renault Sport Racing for this unique opportunity that not everyone gets the chance to have. Max, Will, Gabriel and I made the most of it while also learning about the very busy life of an F1 driver. I hope now to comeback as a driver in the future. That is the goal!”

Will Palmer (R-ace GP): “Although this isn’t my first time in the paddock, it is still interesting to meet a lot of key people to exactly understand how they do things. It is a fantastic opportunity to watch how an F1 team works. I really liked sitting in on the debriefing to hear the feedback from the drivers. Thank you Renault Sport Racing for the invitation.”

Gabriel Aubry (Tech 1 Racing): “This was my first time in the F1 paddock! It is really impressive to see all the logistics and number of people who work around the two cars. I really want to thank Renault for giving me the chance to be in the garage to see this up close and to realize just how much work is needed to reach this level.”

Max Fewtrell (Tech 1 Racing): “It was great to be in Hungary to observe the way things operate and the work between the many departments of the Renault Sport Formula One Team. You can see to what extent it is a lot more complex than the Formula Renault Eurocup. Each second with them is a new lesson! Massive thanks to Renault Sport Racing for the invitation.”

Cyril Abiteboul, Renault Sport Racing, Managing Director: “Renault has an eloquent history in the detection of F1 stars. It is hugely important to let them understand what we expect from them at this level. It was fantastic to be able to host them in Budapest, a circuit that they know very well, to show them how the drivers work as well as their rapport with the engineers. These encounters were also the ideal opportunity to get their impressions about the Formula Renault Eurocup in order to continue to improve this series.”

Mehr in dieser Kategorie: « Financial results for the 1st half of 2017: Groupe Renault continues to grow and sets a new half-year operating margin record A difficult day for Renault e.dams. Both titles to be decided tomorrow »
Nach oben