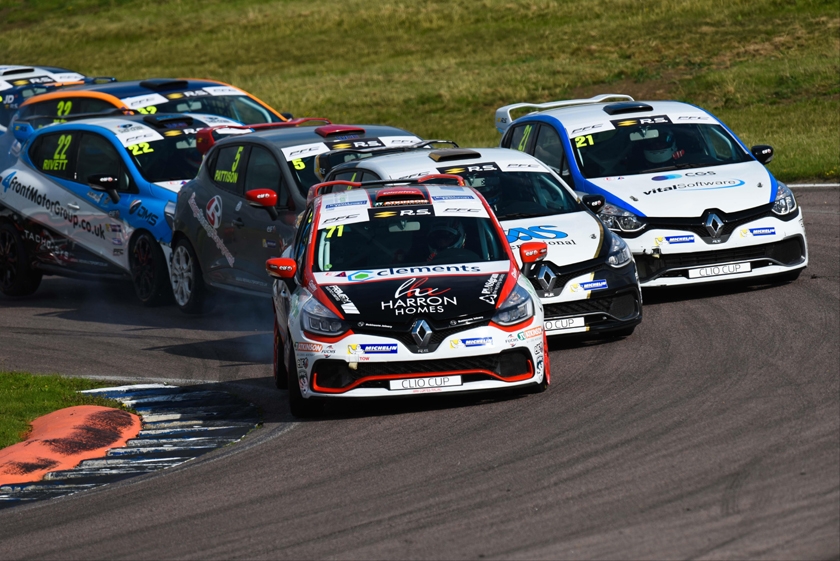 There is now less than a week to go before Silverstone hosts the Renault UK Clio Cup’s penultimate rounds of 2017 (Sat 16/Sun 17 September) and they could provide some history with three-time Champion Paul Rivett (Epsom Downs) set to compete in his 200th race in the category and Mike Bushell (Tunbridge Wells) going into the weekend on the verge of a second crown.

Rivett’s career in the UK Clio Cup has been remarkable – he won on his debut in April 2001 and has since gone on to make it 46 victories in all. That’s a ‘hit rate’ of almost 25 per cent.

His titles in 2002, 2004 and 2011 were each won against mighty opposition including future British Touring Car Championship stars, a Le Mans 24 Hours winner and a World Touring Car champion! CLICK HERE for an interview with him ahead of his landmark 200th race...

Bushell looking good for title number two
Rivett now is both driver and Team Manager for the WDE Motorsport squad and, along with team-mate Lee Pattison (Halifax) and Ciceley Motorsport’s Max Coates (Scorton), is one of three drivers who could yet stop Bushell.It is a mammoth task however. Bushell currently leads the standings by 82 points and only needs to be 69 clear after Silverstone’s two races to be sure of the crown. In fact Bushell could win it in the first of the weekend’s races (on the Saturday) but he will possibly prefer for it to happen in race two (on the Sunday) as it is being broadcast live on ITV4 along with the latest rounds of the BTCC.For the record, to date no driver other than Rivett has won the UK Clio Cup more than once…

You weren't even born, son...
Just to put Rivett’s story into perspective, when he made his UK Clio Cup debut (April 2001), McCarthy was barely six months old and Fulk and Burns – now both 16 and who impressed on their debuts at Rockingham last month – were not yet born!

An entry list rich in quality
McCarthy, aged 17, is in with a chance of winning the Graduates Cup title for younger, rookie drivers but has work to do if he’s to catch Harrison and Westbourne Motorsport’s James Dorlin (Barnsley) in the class. These three along with PP Motorsport/Westbourne’s James Colburn (Worthing) and DRM’s Daniel Rowbottom (Kidderminster) are all potential race winners at Silverstone.

Where and when to watch
The Renault UK Clio Cup’s drivers will first be on track at Silverstone on the Friday (15 Sept) for two timed test sessions, allowing them to fine-tune their cars to the circuit’s characteristics. At 11:25 on Saturday comes the crucial half-hour timed qualifying session which will determine their starting grid positions for the two races (rounds 15 and 16 of the championship). Round 15 is also on the Saturday, at 16:35, and round 16 on Sunday, at 13:40. Both races are 18 laps in distance. As ever the event will be broadcast live on the Sunday on ITV4, from 11.00-18.30.