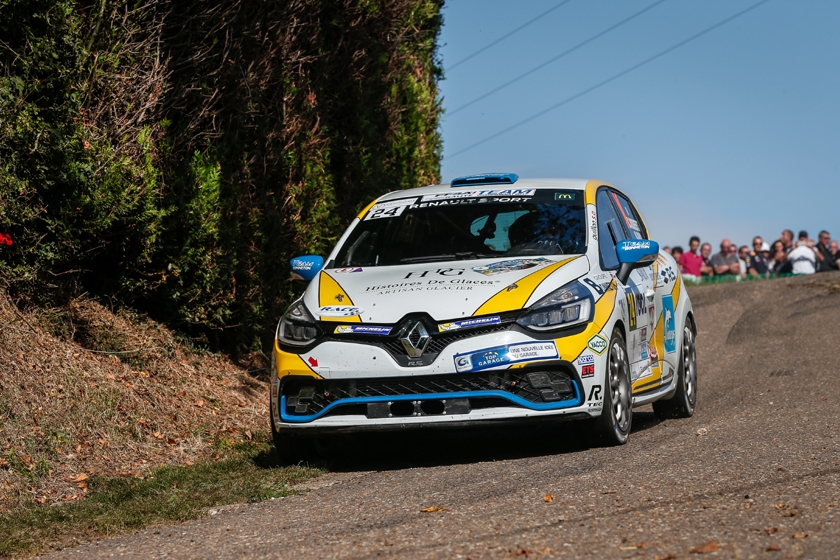 Winners for the fourth time in five outings this season, Cédric Robert and Matthieu Duval sealed the Clio R3T Trophy France title with one round to spare.

Unlike their last remaining challenger in the title race, they managed to keep out of trouble on the tricky roads of the Rallye Cœur de France. On their first appearance in the category, Bruno Longépé – Christelle Orillac finished as runners-up, ahead of Kevin van Deijne – Kris Botson. Despite his retirement, Florian Bernardi could take some consolation from winning the Junior title.

The highly anticipated head-to-head battle between Cédric Robert and Florian Bernardi got off to a flying start in the Loir-et-Cher. Cédric Robert edged ahead over the opening two stages, but Florian Bernardi had fought back by midday, only to blow his chances in a minor off on the repeated Bessé-sur-Braye test.

Some way ahead of the field, Cédric Robert was then able to manage his pace and the leader of the overall standings concluded the day with a 1:17.5 lead and a stage win on Super Savigny. On his debut outing in the Clio R3T Trophy France, Bruno Longépé claimed his first stage win on SS6. Behind him, Frédéric Perriat held third place at that point, 9.8s clear of Kevin van Deijne and 24.5s ahead of Romuald Lezeau.

On Saturday, all eyes were on the fight for third place. In the morning, Frédéric Perriat struck what seemed to be telling blow on Sargé-sur-Braye to distance his rivals by 47.7s, but the event’s local driver then went off between the finish and the time control after setting the fastest time in the Trophy! Kevin van Deijne therefore moved up into third position, whilst Romuald Lezeau closed to within 6.6s.

Bruno Longépé finished as runner-up, concluding his first appearance in the series with a second stage win. The top-three was completed by Kevin van Deijne, who increased his lead over Romuald Lezeau to 21.4s. Despite finishing on the podium, the Dutchman can no longer catch Florian Bernardi, who therefore claimed the Junior title.

The sixth and final round of the Clio R3T Trophy France will be held on 23-26 November, at the Rallye du Var.

Clio R3T Trophy France overall standings (after the fifth round)