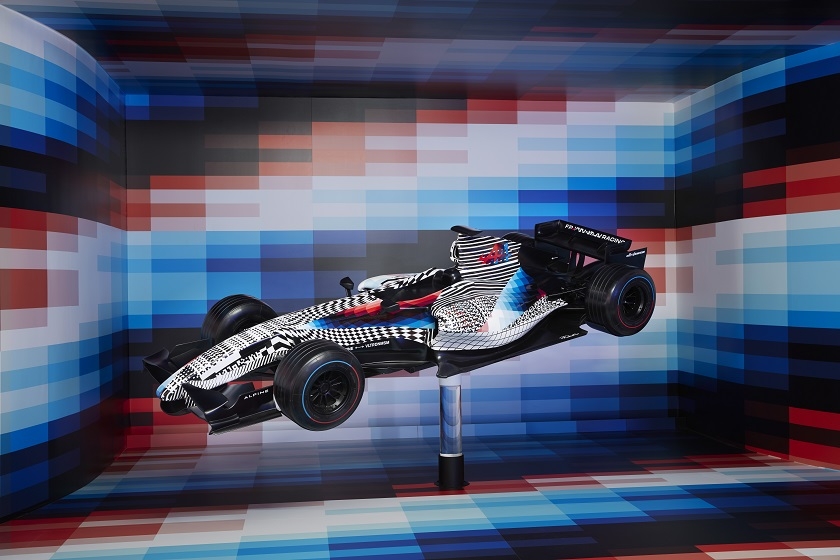 Alpine enters the world of art through a first collaboration with the artist Felipe Pantone. The artist offers his interpretation of the Alpine F1 called "Alpine F1 x Felipe Pantone". This reproduction of the car has been placed on the first floor of the Atelier Renault, entirely dedicated to Alpine. on www.alpinecars.com/fr/felipe-pantone/ ; the exhibition, on display until the end of 2021, will be open to the public at the Atelier Renault as soon as health conditions permit.

An artistic interpretation of the Alpine F1

Felipe Pantone is a true sports car enthusiast. He illustrates his vision of the perfect livery of a first Alpine F1 Team single seater through a 1:2 scale model. The graphic lines of the livery follow the shape of the car painted in Alpine's colours while adding black and white, two of Pantone's signature shades.

"Formula 1 is the pinnacle of engineering. Every year it redefines our idea of what is possible on four wheels. This drive to build the impossible is very inspiring to me. My art is strongly influenced by kinetics and engineering. I work with the latest technologies and materials to find new ways to exhibit visual art." Felipe Pantone

In addition to the car, Felipe Pantone proposes his interpretation of the Formula 1 helmet, an iconic object of the motorsport discipline. The white helmet on display is placed in a transparent and coloured box, making it unique depending on the point of view adopted and the light projected.

This exhibition will be presented until the end of the year on the first floor of the Atelier Renault, on the Champs-Elysées.

Both in motion, the artist's world and Alpine's values blend perfectly. This modern and attractive collaboration positions Alpine halfway between the present and the future.

"We are glad to team up with Felipe Pantone to celebrate Alpine's entering in Formula 1 and the upcoming opening of the Alpine area at the Atelier Renault on the Champs-Elysées. Felipe is an authentic, avant-garde artist and a true sports car enthusiast. His artistic approach is bold, elegant and captivating. It fits perfectly with Alpine's values for the brand's first incursion into Art." Bruce Pillard, Alpine Director, Brand, Launching & Life-cycle

The collaboration between Alpine and Felipe Pantone continues...the brand will unveil the rest very soon!

On the artist's tracks

Felipe Pantone is a Spanish-Argentinean artist based in Valencia, Spain. He’s a graduate in Fine Arts and has been a graffiti artist since the age of 12. A born globetrotter, he travels and exhibits his works throughout the world. A mix of conventional and abstract graffiti, Pantone's work is ultra-modern: the graphic design of his works blends with highly evolved geometric forms, putting into perspective the movement and dynamism of the contemporary world. Constantly drawing, his artistic identity was structured through his meetings with graffiti artists, dancers and other street artists. Pantone uses bright colours and graphic patterns so that the eye of the spectator is focused on his work and not on what surrounds him.

A space dedicated to Alpine at the Atelier Renault

As soon as the Atelier Renault reopens, a space dedicated to Alpine will be inaugurated on the first floor. Within this space, divided into 3 zones, visitors will be able to discover the brand's universe: an experiential zone is dedicated to the Atelier Alpine customization program, the exhibition of the collaboration between Alpine and Felipe Pantone and the new Cocktail Bar named "La Flèche Alpine Lounge".