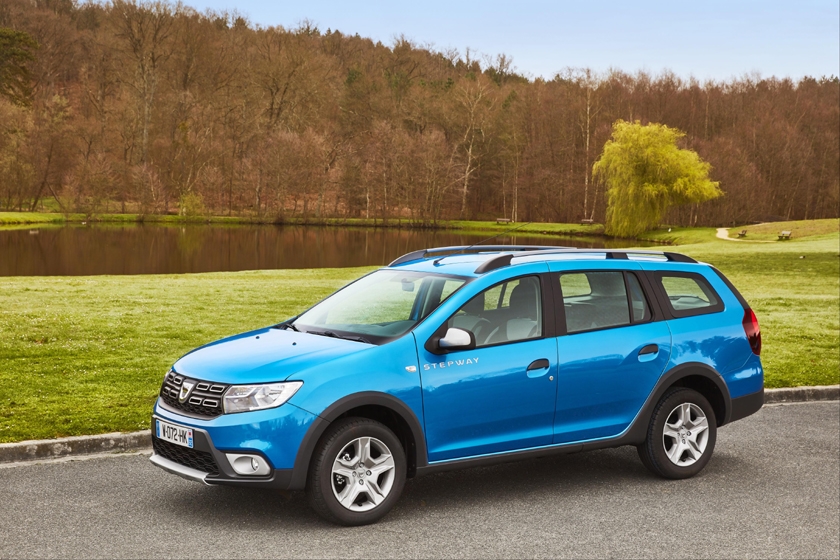 Dacia has announced UK pricing and specification for its New Logan MCV Stepway which was unveiled at the Geneva Motor Show in March. The distinctively rugged version of the New Logan MCV Stepway follows in the footsteps of the New Sandero Stepway. The fifth member of the Dacia UK range is available to order now priced from £11,495 with first customer deliveries expected in June.

At the front, the New Logan MCV Stepway sports a two-tone bumper as well as a satin-effect chrome skid plate, plus the fitment of fog lights. The model incorporates Dacia’s new lighting signature, unveiled at last year’s Paris Motor Show, with headlights that now incorporate LED Daytime Running Lights (DRL) in the form of four stacked rectangles. This modern design results in a visibly wider look for the front end of the New Logan MCV Stepway.

Like its New Sandero Stepway cousin, the New Logan MCV Stepway’s grille mirrors the black elements of the two-tone bumper, with the chrome rectangles rounding off its distinctive style in much the same manner as the Duster.

At the rear, tail lights are bordered with black metal and echoes the front end with its two-tone rear bumper and satin-effect chrome skid plate – characteristics of Dacia’s Stepway range.

The New Logan MCV Stepway Lauréate comes in a choice of nine colours at launch, combined with new, 16-inch Stepway Flexwheels. This smart, economical and attractive system comprises a wheel trim design that fits over a similarly slotted rim.

Inside, the New Logan MCV Stepway benefits from the same upgrades given to the rest of the Dacia range in late 2016 with satin-effect chrome finish for the air vent surrounds, trim strip and centre console fascia, while a new four-spoke steering wheel design has an exclusive Soft Feel finish and a ‘Stepway’ logo on the chrome surround.