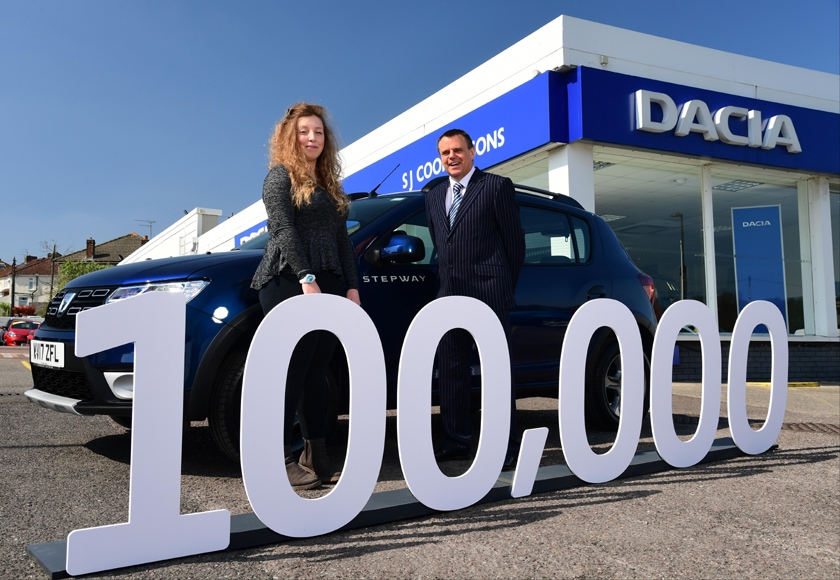 Dacia has sold 100,000 vehicles in the UK since launching here in 2013 and establishing a reputation for incredible value for money and robust reliability. With her purchase of a New Sandero Stepway TCe 90 in Cosmos Blue metallic, Heather Reiss became the brand’s 100,000th customer in the UK. Heather collected her new car in Lauréate trim from S J Cook and Sons, Bristol – her second Dacia in three years – and was welcomed by James Hardiman, Sales Manager at S J Cook and Sons and Jeremy Townsend, Communications Director, Groupe Renault UK.

Louise O’Sullivan, Head of Dacia UK, commented: “Dacia was launched in 2013 and straight away we had great public interest in the brand. In four years the Dacia community has built up significantly thanks to the annual Dacia Day, a Dacia owners club and major brand partnerships like our one with the Rugby Football League. Loyalty to the Dacia brand has never been higher as we’re starting to see many customers, like Heather, returning to the brand to trade their old Dacia in for a new one. We wish Heather all the best in her new Sandero Stepway.”

Heather Reiss, from Bristol, said: “I purchased my first car, another Dacia Sandero Stepway, three years ago. Originally I was looking at buying a second hand car but when we arrived at the dealership, I instantly took a liking to the Sandero Stepway and thought ‘I wish I could afford it’.  After finding out more and taking it for a test drive we decided that it would be silly not to get one. With a little help from the Bank of Mum and Dad for the little amount that I was short, I could afford my new Dacia – best decision ever!  Since then, my Mum has bought a Duster as has my auntie.  When the time came to trade it in, I didn’t think of going anywhere else. It’s exciting to know I’ll be driving around in a piece of Dacia history.”

James Hardiman, Sales Manager at S J Cook and Sons said: “We’re very pleased that Heather chose to come back to SJ Cook and Sons for her second Dacia and we’re excited that the 100,000th model in the UK was at the dealership. The brand has proved extremely popular for the dealership since launching in 2013 and we have found that customers enjoy the robust, no-nonsense simplicity of Dacia vehicles. We wish Heather many happy miles in her New Sandero Stepway!”

The 100,000th Dacia
The 100,000th Dacia sold in the UK was a New Sandero Stepway TCe 90 in Cosmos Blue. The New Sandero Stepway is a compact crossover based on the Dacia Sandero, with a 40mm raised ride height, roof bars, extended wheelarches and front and rear skid plates. It is available in two different trim levels – Ambiance and Lauréate – and two engines – a petrol TCe 90 and a diesel dCi 90. The Sandero Stepway, along with the rest of the Dacia range, was revised in December 2016 with updates to the front and rear lights and an upgraded interior with air conditioning and DAB radio as standard – making the Sandero the most affordable car in the UK with A/C as standard. The New Sandero Stepway range is priced from £8,995 on-the-road.
An award-winning range
Dacia has won 36 awards in the UK since launching including What Car?’s ‘Best Small Car under £12,000’ for five consecutive years for the Sandero. One of the UK’s largest automotive owner satisfaction studies, Auto Express Driver Power, has placed Dacia in its top five best manufacturers for three consecutive years, out of 32 brands featured in the 2016 survey, with customers praising the brand’s reliability in particular. Dacia also finished second in the Auto Express Driver Power Dealer Aftersales Service Satisfaction survey in 2016.
Community investment
Dacia has been involved with the Rugby Football League (RFL) since February 2016 as Official Car Partner of the Betfred Super League and the Ladbrokes Challenge Cup, Principle Partner of the Magic Weekend and Title Partner of the World Club Series. With shared values of being robust and reliable, in addition to their support for the professional game Dacia is also working with the RFL to support local communities to benefit grassroots level teams and players. The Dacia #FlairPlay programme encourages community club players around the country to share their most skilful manoeuvres for their team to be in with a chance of winning an open training session led by players and coaches from one of the 12 Betfred Super League clubs as well as training equipment, auction items and marketing support.

Dacia UK’s free ‘Dacia Day’ event, exclusively for Dacia owners, offers opportunities to meet with other passionate Dacia owners and provides a fun day out for the whole family.  The next one is scheduled for the summer of 2017 with a date to be confirmed in the coming weeks.

Over 4 million Dacias have been sold in Europe since the brand’s reintroduction by Groupe Renault in 2004.