Dacia Magic Weekend to return to Newcastle in 2018 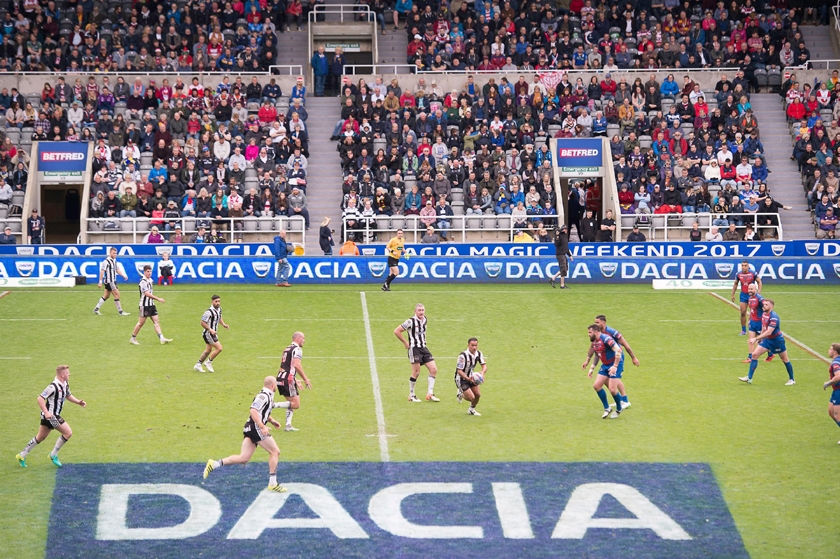 Following the success of the Dacia Magic Weekend in Newcastle over the last three years, Super League (Europe) is delighted to announce the 2018 event will be returning to St James’ Park, Newcastle on Saturday 19th May and Sunday 20th May.

Magic Weekend has been held in Newcastle every year since 2015 and has drawn in the three highest attendances for the weekend since the event began in 2007.

The fixtures for the Dacia Magic Weekend 2018 have also been revealed with three Betfred Super League games taking place on the Saturday and three on the Sunday.

Castleford Tigers and Leeds Rhinos will face each other in a rematch of the 2017 Betfred Super League Grand Final in the closing game on Saturday evening. The Tigers, who were defeated 6-24 by the Rhinos at Old Trafford earlier this month, will come head to head with Leeds in Newcastle for the second consecutive year at 7.30pm on Saturday, May 19.

Following the exciting 24-all draw between Wigan Warriors and Warrington Wolves at St James’ Park in 2016, the two sides will face each once again on Saturday afternoon at 5.15pm following the opening fixture of the weekend between Widnes Vikings and St Helens which kicks off the round of Betfred Super League fixtures at 3.00pm.

Salford Red Devils and Catalans Dragons will kick off the second day of the annual Rugby League extravaganza when they go head-to-head for the first time in the event’s history at 1.00pm. Wakefield Trinity then take on Huddersfield Giants at 3.15pm, before Hull KR make their highly anticipated return to Dacia Magic Weekend against derby rivals Hull FC, bringing the curtain down on an action-packed weekend at 5.30pm.

Announcing the decision to return to St James’ Park, Super League General Manager, Mark Foster, said: “We are delighted to be bringing the Dacia Magic Weekend back to Newcastle for a fourth year. We had a number of other cities bid to host what is a fantastic event but Newcastle is a great venue for us – the city has made us feel incredibly welcome over the last three years and we know our fans love to come to Newcastle for the weekend.”

Dacia Communications Manager, Ed Preston said: “Dacia Magic Weekend is something that we’re immensely proud to be a part of. It’s a real festival of the sport and a time for the whole rugby league community to come together. The past two years have been thoroughly enjoyable and we’re very excited to be coming back to Newcastle once again in 2018.”

Cllr Kim McGuinness, Cabinet Member for Culture and Communities at Newcastle City Council said: “We are absolutely thrilled to be hosting Dacia Magic Weekend for a fourth successive year, and to be working with partners to deliver another successful event and attract record breaking crowds.

“Newcastle now has a really strong reputation for hosting major sporting and cultural events, and fans come back time and time again to experience our great city and what is has to offer.

“2018 is set to be a big year for Newcastle with Magic Weekend and the Great Exhibition of the North, and we’re committed to making sure it’s truly memorable for everyone.”

Sean Bullick, Chief Executive of NE1 Ltd said: “We are delighted to be hosting Magic Weekend in Newcastle for a fourth year running, something no other city has ever achieved. Each year the event gets bigger and better as more people get acquainted with the phenomenon that is Magic.

“The impact of Magic Weekend on the city is significant and the rugby games on the pitch are only part of the story – Magic brings a carnival atmosphere to the city and there’s a real buzz over the weekend with the thousands of Magic Weekend fans filling the city’s hotels, bars, restaurants and shops.

“We have a strong track record of hosting major events in Newcastle and now, having secured Dacia Magic Weekend for 2018, next year is set to be the biggest year in recent memory for hosting major events. We can’t wait to deliver another hugely successful event.”

Lee Charnley, Newcastle United's Managing Director said: "We’re very proud to have hosted the Dacia Magic Weekend for the last three years, and as excited as always to be hosting this magnificent sporting event once again in 2018.

"As everyone who’s attended in previous years will know, it’s a fantastic weekend of rugby which has consistently welcomed sell-out crowds and has become of the ‘jewels in the crown’ in Newcastle’s annual sporting calendar.

"We’re delighted that the Super League continue to recognise the quality of the venue, facilities and support we provide at St James’ Park, as well as the great working relationship we have developed with the Super League and our partners across the city in playing host to such a fantastic event."?

Tickets can be purchased by visiting rugby-league.com/tickets or by calling the Rugby League Ticket Hotline on 0844 856 1113 (calls cost 7p plus your network connection).

The 2018 Magic Weekend schedule is as follows: