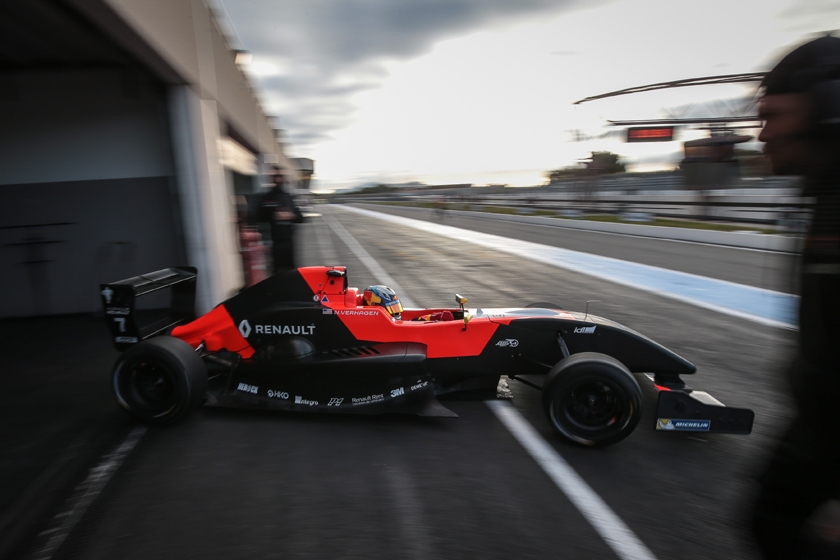 In the final day of 2017 collective testing, the American Red Bull Junior Team driver set a lap of 2:02.703s at Circuit Paul Ricard to lead the way ahead of rookie Victor Martins (R-ace GP) and Richard Verschoor (Josef Kaufmann Racing), both of whom were quickest in the morning. Since the last race of the season, Neil Verhagen has been quickest on each of the three days of the official collective tests.

26 drivers were present in the south of France to officially close out the year. Julia Pankiewicz was back at Mark Burdett Motrosport after a run with Tech 1 Racing, where she was replaced by French F4 Champion, Arthur Rougier, who came over from Fortec Motorsports.

In the morning session, the times quickly improved when Neil Verhagen lowered yesterday’s benchmark time in the second hour. The times kept dropping with Victor Martins clocked in with a lap of 2:02.757s heading into the final hour. The French rookie was followed by Richard Verschoor and three other R-ace GP drivers, Logan Sargeant, Charles Milesi and Renault Sport Academy member Max Fewtrell.

Following the lunch break, some teams concentrated on race simulations to prepare for the longer, 30-minute plus one lap for 2018. The pace picked up late in the day. After a short stoppage provoked by Christian Lundgaard (MP Motorsport), Neil Verhagen improved to 2:02.703s to lead from Lorenzo Colombo (JD Motorsport) and Yifei Ye (Josef Kaufmann Racing). Arthur Rougier and Alexander Vartanyan (Arden Motorsport) completed the top five.

Competitors now have until December 15 to complete their private test programmes, the last chance to get some track time before the first official collective tests in the spring of 2018.

“The winter has gone quite well so far. After a small dip at the Spa test, I have been on form since Monza. Yesterday morning, I was really comfortable and it resulted in the best time. It was a little harder after that, but nothing that can’t be fixed! I need to work more on consistency and race pace over a full-length simulation. I also have to learn how to handle the pressure. My goal next year will be to be among the best rookies in the Formula Renault Eurocup.”

“I now feel at home with AVF by Adrián Vallés. During the winter tests, we have worked like dogs to come back stronger next year. I have been concentrating on my progression margin with new tyres, which is a very important aspect in the Formula Renault Eurocup. We were also able to test different set-ups. I hope it will pay off.”

“I prepared for these test during a day in the simulator, but the real thing is always different and I came across an array of technical and tricky corners! Nonetheless, we progressed throughout the two days and acquired precious information. I still have to find the right feeling to get the most out of the new tyres, but I did a good job when I look at the number of sets used by some of the others! I am going to continue my testing programme. I need more track time in the Formula Renault as I move more and more towards this category. "

Jarno Opmeer wants to return in 2018

“Although this was just my second test from the four done by the team until now, our pace was already better than last year. We still need to improve on qualifying runs, but the solution isn’t far off. It will be all the more important as we were pretty good in race conditions this year. I am still not sure if I will return to the Formula Renault Eurocup, but I certainly plan to!”

“We are improving every day during testing and that is a good sign for the future. These past two days have been a very enriching experience in comparing how things work at Tech 1 Racing and Mark Burdett Motorsport In parallel, I concentrate on my progress on each circuit. I can still gain time here and there in each corner to largely improve my times. Although nothing is decided yet, I really hope to able to come back next year.”

“The winter has gone really well for the moment! We have been trying different set-ups on the car, with highs and lows, but the most important thing is to gain experience and study the data of the other drivers. I am also learning about Arden Motorsport, which is a very different team in the way it works compared to JD Motorsport. I should be returning in 2018, but SMP Racing will have the last word about that!”