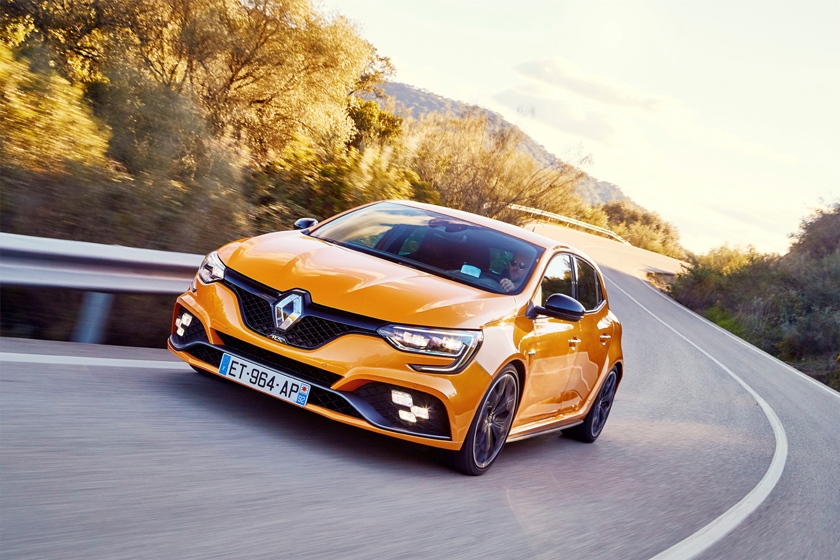 First unveiled at the Frankfurt Motor Show in September 2017, New Renault MÉGANE R.S. has been eagerly awaited by sports driving enthusiasts. Aiming to become – like its predecessors – a benchmark in the C-segment hot hatch market, this third generation of MÉGANE R.S. is packed full of Renault Sport expertise and passion.

Driven by its powerful design and focused on performance, New Renault MÉGANE R.S. makes no attempt to hide its motorsport pedigree, offering outstanding driving pleasure on the road and on the track.

"Since the first generation of Mégane R.S. was released in 2003, we have constantly provided greater performance and more technology, offering improved driving pleasure without sacrificing the car's versatility for everyday use… Launched in 2009, Mégane III R.S. has become a genuine icon. Replacing it was a real challenge for the entire team. We're proud to have managed to produce a car with improved cornering efficiency, largely due to the introduction of 4CONTROL. The system improves both agility on tight corners and stability on fast bends, on the road and on the track. Drawing on the brand's vast motorsport heritage, New Renault MÉGANE R.S. has been designed by people who are passionate about cars for people who love to drive. Its versatility also makes it perfectly suited to everyday use." Patrice Ratti, Managing Director, Renault Sport Cars

"After having been involved in the development process during 2017, I'm very proud to be the ambassador for New Renault MÉGANE R.S. I had the opportunity to drive the car at various racetracks – Monaco, Montlhéry and Spa-Francorchamps – and I was impressed by the efficiency of the latest onboard technologies. The 4CONTROL system is a dream come true for every driver looking for efficiency, since it improves both the agility and the stability of the car. It's a shame that four-wheel steering systems are banned in Formula 1!" Nico Hülkenberg, Renault Sport Formula One Team driver and Renault Sport Cars ambassador

A CHASSIS COMBINING PERFORMANCE, AGILITY AND STABILITY 4CONTROL technology: exclusive to the segment

Having raised the bar on handling with Mégane III R.S., the chassis and suspension system engineers have pushed the limits even further by introducing 4CONTROL technology on New MÉGANE R.S.

Provided as standard on the Sport and Cup chassis, this four-wheel steering system is a world first in the compact sports car segment.

Renault Sport's chassis and suspension system experts have extensively revised the settings of the 4CONTROL system in order to adapt it to a high-performance sports car. This has created an even more efficient driving experience, giving drivers the feeling that the car is literally glued to the road.

Strong core components, featured in all the generations

Included since the first generation of Mégane R.S. that appeared in 2004, the independent steering-axis front suspension epitomises Renault Sport's expertise in chassis and suspension systems. Initially designed for use in motorsport, independent steering-axis front suspension has been adapted to powerful front-wheel drive cars, especially when they are also fitted with a limited slip differential.

The front axle of New MÉGANE R.S. has been entirely redesigned in order to adapt the negative offset geometry to the width of the 19-inch wheels and increase rigidity.

New Renault MÉGANE R.S. is available with two chassis: Sport and Cup. This option, which allows customers to choose between two types of handling, stands out thanks to the specific suspensions settings (springs, shock absorbers, stops and anti-roll bar stiffness).

Designed to be at its most efficient on the road, New MÉGANE R.S.'s Sport chassis provides new versatility on all types of surface, including the poorest quality and most uneven roads. It comes with new shock absorbers and an electronically-controlled torque distribution system. By acting independently on the drivewheel brakes, this technology limits understeer and improves traction when exiting corners.

Suited to intense sports-style use and especially to driving on racetracks, the Cup chassis offers a 10% stiffer damper system and a new Torsen® mechanical, limited slip differential. With modified settings compared with the previous generation, this new diff improves handling in all phases:

Previously acclaimed on Mégane III R.S., the braking system has been improved, offering drivers greater power, endurance and therefore confidence behind the wheel. The diameter of the front brake discs has been increased to 355mm (+15mm compared with the previous generation). Available as an option on the Cup chassis, bi-material aluminium/cast iron discs help reduce the weight per wheel by 1.8kg, whilst improving cooling during intensive use. The brake pedal setting focuses on the accuracy of the pressure applied, enabling drivers to remain in complete control, especially on the racetrack.

The second brand new feature on the chassis of New MÉGANE R.S. is hidden in its suspension. Once again, Renault Sport has raised the bar by fitting the hydraulic compression stops to all four shock absorbers.

This rallying-inspired technology involves integrating a "shock absorber within the shock absorber". As the end of travel is approached, a secondary piston dampens the movement of the wheel before the bump stop. By dissipating the energy without transferring it to the wheel – as a traditional bump stop would – the compression hydraulic stops help avoid any rebound and pendulum effects, enabling optimum control of tyre-ground contact.

The Mégane II R.S. adventure concluded in style in 2008 with the limited edition R26.R. A staggering 123kg lighter, it broke the lap record for a production car with a time of 8:17 on the Nürburgring's Nordschleife.

The third generation of MÉGANE picked up the baton in 2009, with a 250hp engine and an even more distinctive, muscular look with the introduction of the F1-style blade on the front bumper.

Until 2016, the career of Mégane III R.S. evolved through the release of limited editions and stylistic changes. In 2011, the Trophy version, with its new 265hp engine, impressed with a new lap record at the Nürburgring (8:07.97). Times improved further with the 275 Trophy and the Trophy-R (2014). Driving this last version, Laurent Hurgon dipped under the eight-minute mark on the Nordschleife, setting a third record with a time of 7:54.36.

More than 53,000 cars from the first two generations of MÉGANE R.S. were sold in Europe, as well as in Japan, Australia, South Africa and beyond. Unveiled for the first time at the 2017 Monaco Grand Prix, New Renault MÉGANE R.S. picks up where they left off.

New Renault MÉGANE R.S. comes with a new version of the 1.8-litre direct injection turbo engine, derived from synergies in the Renault-Nissan Alliance. This version develops a power output of 280hp (205 kW) at 6,000rpm and a peak torque of 390Nm available from 2,400 to 4,800rpm. A key factor in driving pleasure and comfort, the car boasts one of the best torque ratings in the category.

In order to achieve the required performances, Renault Sport's engine specialists designed a completely new cylinder head, with a reinforced structure and more efficient cooling that dissipates heat right next to the combustion chamber. The design was entrusted to a task force made up of the best specialists from Renault Sport Cars, Renault Sport Racing and the Renault Technocentre1. By using the calculation and simulation facilities at the Viry-Châtillon site, development time was slashed to just six months.

To increase the supply of cool air to the engine, the air intake was redesigned with the addition of a second air inlet and a new, larger filter element.

Still with improved performance in mind, New MÉGANE R.S.'s engine has been given surface treatments taken from the world of racing and supercars, such as DLC (Diamond Like Carbon) for the valve lifters and Mirror Bore Coating for the cylinder sleeves.

By the end of the year, Renault Sport will be releasing a "Trophy" version, with power output upped to 300hp and a peak torque of 400Nm. The Cup chassis, 19-inch wheel rims and the bi-material brake discs will be standard on this version.

An optional six-speed EDC dual-clutch gearbox is also available now. In order to provide complete reliability, this gearbox – which is already in use on several models in the Renault range – has been strengthened to withstand the torque and revs of a sports car engine. Based on the required take-off acceleration, in-gear acceleration and maximum speed, the Renault Sport engineers defined new gear ratios and specific shift patterns, associated with the MULTI-SENSE modes so as to adapt to all driving styles.

Like racing cars, the EDC gearbox comes with steering wheel-mounted gearshift paddles. The gearshift times depend on which MULTI-SENSE mode is selected:

In Sport and Race modes, the EDC gearbox also has the following functions:

Wider tracks and features taken from the world of motorsport

With expressive and sporty styling, New MÉGANE R.S. has been designed to deliver performance, right down to the very last detail. The specific body sides mean that the wings have been widened by 60mm at the front and 45mm at the back (compared with Mégane GT). With the ride height lowered by 5 mm compared with Mégane GT and new 18- or 19-inch wheels, these new proportions make the car naturally more aggressive.

This powerful design is boosted by a number of features taken from the world of motorsport, which immediately place New MÉGANE R.S. in the high-performance category:

New MÉGANE R.S. also stands out with an emblematic colour: Tonic Orange, which supplements the palette of Renault Sport colours. Like Sirius Yellow, this new colour has been specifically developed for a vibrant finish and unique reflective effects, highlighting the profile of the car.

The cabin's resolutely sporty design is apparent everywhere you look:

Specific work was done on the shape and materials of the seats to find the best compromise between the comfort needed for everyday use and the support required when driving on a racetrack.

2 Varies according to country.
3 Except on variants with sun roof.

THE MANUFACTURING PERFORMANCE OF THE PALENCIA PLANT

Located 235km to the north west of Madrid, Renault's Palencia plant has built over four million Mégane cars since 1995. Thanks to the investments made recently in the press shop, body shop and paint department, as well as on the assembly line, the plant has met the challenge of producing New MÉGANE R.S. The front wings and the widened body sides have now been integrated into the bodywork, without the need for inserted or fixed parts, thus improving perceived quality.

And if you want to go even further with R.S. Monitor Expert, the recorded data may be exported to the R.S. Replay website. You can then play back your driving sessions, analyse your laps down to the very last detail and compare them with other users from the Renault Sport community.

Introduced on New Clio R.S., the multi-reflector LED lighting system R.S. Vision comes as standard on New MÉGANE R.S. These chequered flag design lights are integrated in the front bumper, either side of the F1-style blade.

Unique in this market segment, R.S. Vision meets the need for powerful, efficient lighting, in line with the other features offered by New MÉGANE R.S.

With a range of 460 metres4 (+17% compared with Mégane III R.S.), the high beam lights perfectly complement the Full-LED technology headlamps. For the first time, the C-Shape lighting signature incorporates the indicator lights.

4 Measurement at 1 lux, the value representing the limit of light perception by a human eye.

Controlling engine response, the mapping of the accelerator pedal, shift patterns5 and the stiffness of the steering, the MULTI-SENSE system lets drivers customise their experience according to the circumstances. Five positions are available:

The various modes may be accessed via the R-Link 2 touchscreen tablet. The R.S. Drive button provides a shortcut to the Sport (short press) and Race (press and hold) modes.

For the comfort and safety of the driver and the passengers, it comes equipped with all of the advanced technologies featured on Renault Mégane:

5 On the EDC gearbox.