Renault e.dams and Sebastien Buemi clinch their third podium finish on the bounce! 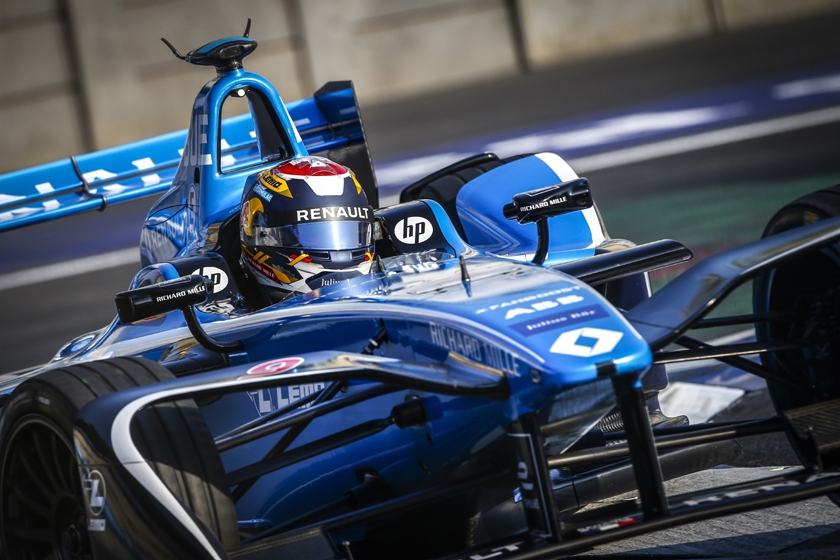 In the hothouse ambience reigning on the Rodriguez Brothers Autodromo, Sébastien Buemi played his part in the on-track action in the Mexico ePrix helping the Renault e.dams team to their third podium finish on the bounce!

The Renault Z.E.17 in the hands of Sébastien Buemi showed searing pace as he set the fastest time of the qualifying groups on this circuit that uses part of the Formula 1 layout. But in the SuperPole shootout, the Swiss driver was unable to reproduce this performance and qualified on the second row.

When the lights went out Buemi held on to third place behind Rosenqvist and Turvey. Lap 15 saw the first major upset when the leader suddenly slowed. But Buemi’s tenure of second place was short lived as he was passed by Abt 23rd time round.

After the car changes, Abt rejoined in the lead in front of Turvey, Vergne and Buemi. Seb used the extra power allowed by the FanBoost to slice past Vergne in superb style. He drew away from the championship leader and pulled in Turvey as the race entered its closing stages. As always in Formula E, the final laps were the theatre of a frantic battle especially as Nelson Piquet Jr had joined in the scrap for second place. Last time round, Buemi attempted to pull off a daring overtaking move, unfortunately without success. Despite this, the Renault e.dams driver went on to seal his hat trick of podium finishes this season.

His team-mate, Nicolas Prost, qualified in 15th place and made a good start avoiding the pitfalls inherent in starting in mid-field. He pulled back a place on the first lap and then set a steady pace in the group chasing the leaders.

The Frenchman emerged in 13th place after changing his car and looked on course for a points finish. But his race came to an abrupt halt with nine laps to go to the chequered flag when he was tagged by Sam Bird; he had to pit and retire due to damaged front suspension.

Although it was a frustrating result for Renault e.dams as the team had only one car in the top 10, it has held on to its fifth place in the teams’ championship while Buemi leaves Mexico still lying fourth in the drivers’ ratings.

“I trained really hard for this circuit, which I like very much. I can’t explain why I wasn’t quicker in qualifying especially as things went off well in free practice. I think I could have finished the race in the points, but Bird tagged me when I was overtaking him. I couldn’t do anything to avoid it and it’s difficult finishing the day in this way. I’m still motivated and I’m sure that I’ll soon be back on the road to success.”

“Overall, I’m pretty happy as it’s our third consecutive podium finish this season. It’s also my 20th top-3 finish in Formula E! Of course, you always want to do better, but even so I’m satisfied. We’re going to start focusing on the next round in Uruguay straight away. We’ve won the two races already held at Punta del Este and our aim will be to fight for victory again.”

Jean-Paul Driot, co-owner of the team

“It’s been a very positive weekend with our third podium finish on the bounce, which just goes to show that we’re among the most consistent teams this season. But it’s still a bit frustrating because in qualifying Seb locked up his front wheels in the first corner of his Superpole lap. Although we didn’t win, our steadiness will certainly be rewarded at the end of the championship. The work we’ve done over the past few weeks has borne fruit and we’ve improved the car’s balance in the race. We have to continue to find some more speed and be a position to win. We’re really looking forward to the next round in Punta del Este.”

“What an incredibly closely-fought season! The first five who made it into the SuperPole shootout were covered by less than two-tenths–of-a-second, and we saw new contenders emerging for the places at the front. More than ever, we believe that consistency will pay off. With this in mind we’re very satisfied with Seb’s result as he was on the podium for the third time on the trot. At the same time, we’re very disappointed for Nico who was fighting his way back before being tagged. We still have to improve our performance to be in a position to win as our rivals in the championship have done.”