Logan Sargeant wins the first race of the 2018 season 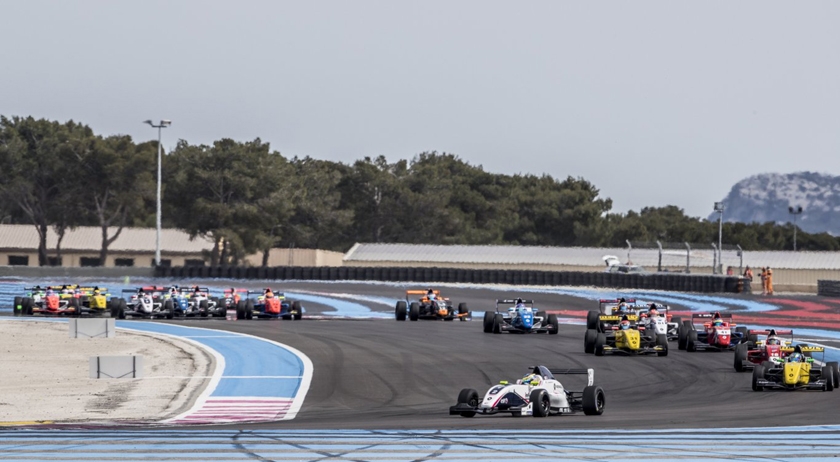 Starting from row one, the American rookie got the advantage at the start over his team mate and Renault Sport Academy driver Max Fewtrell (R-ace GP). Yifei Ye (Josef Kaufmann Racing) completes the podium behind the two R-ace GP cars.

Another pole for Max Fewtrell

After winning the pole for race two at Circuit Paul Ricard, Max Fewtrell did it again this morning by outpacing Victor Martins (R-ace GP) with a time of 2:02.456s. In Group A, Logan Sargeant went fastest ahead of Yifei Ye and the rest of the group with a lap covered in 2:02.908s.

The race started after an extra formation lap due to Alexander Vartanyan (Arden Motorsport) lining up in the wrong place on the grid.

Making the most of the poor starts from Max Fewtrell and Victor Martins, Logan Sargeant leapt from second into the lead ahead of Max Fewtrell, Yifei Ye, Christian Lundgaard and Lorenzo Colombo (JD Motorsport), who started eighth. Meanwhile, for Richard Verschoor (Josef Kaufmann Racing), Alex Peroni (MP Motorsport), Max Defourny (MP Motorsport) and Arthur Rougier (Fortec Motorsports), the race was over after the first few laps.

The two leaders soon pulled away from the field in swapping fastest times on each lap. Logan Sargeant remained unperturbed and took his time in constructing his win in the latter half of the race.

Further back, Yifei Ye had to battle just until the chequered flag was waved to fend off the return of Lorenzo Colombo, who got past Christian Lundgaard on lap two. Sixth place went to Oscar Piastri, who finished ahead of Red Bull Junior Team driver, Neil Verhagen (Tech 1 Racing), SMP Racing protégé, Alexander Smolyar (Tech 1 Racing) and Charles Milesi (R-ace GP).

Logan Sargeant (R-ace GP): “This is literally the perfect start to the season! I knew that it wasn’t going to be an easy challenge to beat Max. I was a bit lucky he made a poor start, which let me take the lead. Then, I just had to make sure I handled the pressure, avoiding any mistake and not being overtaken. That’s the most important part about being a race driver! Last year, I drove a Formula Renault here to gain experience. It helped, but the racing level is much higher in the Eurocup. Nevertheless, I don’t think being a rookie is a bad thing at all. It makes me want to beat those with greater experience even more!”

Max Fewtrell (R-ace GP): “I want to first congratulate Logan for his superb race. We are under the same management and we were team mates for a few years in karting, so we’ve known each other for a long time. Can he be a threat this year? I think this race answered that question! As for my results, I am a bit gutted. With the numerous start procedures, I think we had a clutch problem. I don’t like looking for excuses, but we need to take a look at this. In any case, I’m delighted we scored a lot of points today for the team.”

Yifei Ye (Josef Kaufmann Racing): “This morning, we were a bit unlucky in not setting best time in our group in qualifying for just 0.02s. So, I had to start from row two, but I picked up a position at the start. Unfortunately, we didn’t have the pace to battle with the two leaders, which could be due to tyre pressures. We were good during winter testing, so we will work hard to return to the top of the order. Tomorrow, I start on row one and I hope I have a better race!”