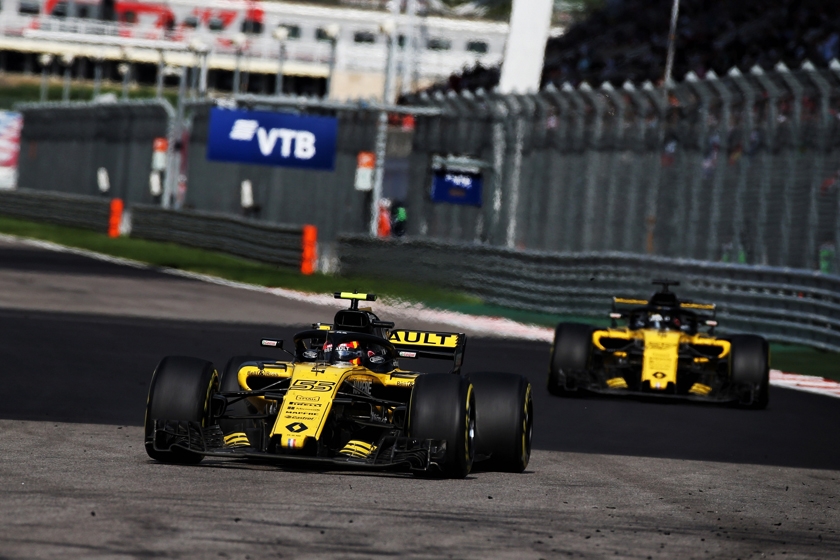 Renault Sport Formula One Team fell short of its ambitions in the VTB Russian Grand Prix with Nico Hülkenberg taking twelfth and Carlos Sainz nursing his crash-damaged car to seventeenth at the Sochi Autodrom today.

Running an alternate strategy to the cars ahead, both drivers made good headway early in the race on the Soft tyres, however Carlos was hampered by early contact damage to the floor and sidepod vane on the right-hand side of his car, meaning he dropped back through the race. Nico ran as high as seventh, however he finished two-places shy of the points. The team remain in fourth position in the Constructors’ Championship.

“Unfortunately, we weren’t able to get the maximum from the strategy today. We had a clean race without any incidents and it was positive to be running in P7 for so many laps, but we weren’t able to make the places back after the pit stop. We gave it our best shot and converted the alternative strategy pretty well, but we couldn’t make it pay off in the end.”

“I have mixed feelings after today. At the start I got away from the line really well on the Soft tyre and was past a couple of cars with the Hypersoft tyres. However, I got hit by a Williams into turn two and, even though I didn’t feel much, the floor and side of the car was destroyed and that made it really difficult to drive. I stayed out on track to try and help the team with the strategy, holding back the other midfield cars as much as possible, but unfortunately today the points were out of reach. When I jumped out at the end of the race I could see how bad the damage was and it made sense why the car was almost undriveable. Time to prepare for Japan now.”

“It was a disappointing race for us. It’s clear we made the correct decision in qualifying yesterday as it offered the best strategy for the Grand Prix today, racing in seventh place before our stop and clearly in contention for points. Unfortunately we weren’t able to capitalise on the full benefits. Carlos suffered from contact early in the race and the damage cost him a second per lap thereafter. Nico’s strategy looked to be working with a similar race pace to our direct competitors, but our race, and in particular the last stint, was compromised by excessive fuel management earlier in the race. Overall a weekend to put behind us; we knew we would struggle here and we gave it our best so we move on to Japan.”