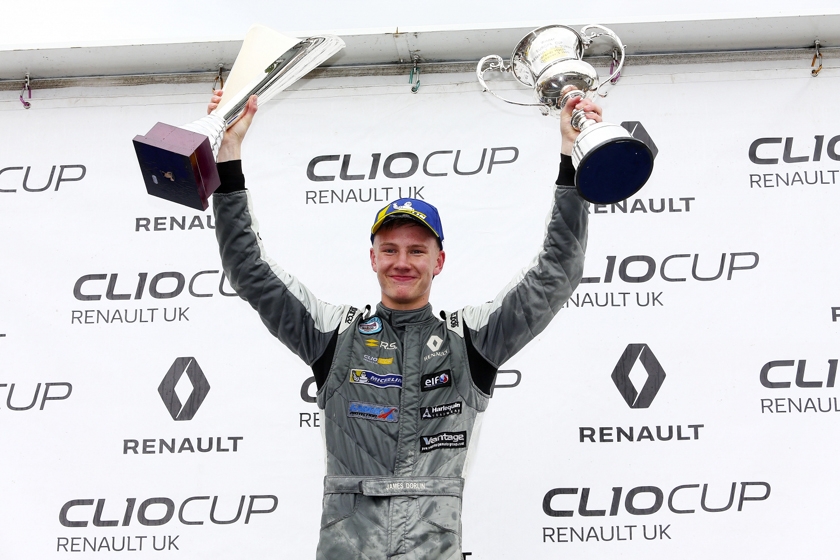 James Dorlin (Barnsley) has provisionally been crowned the 2018 Renault UK Clio Cup Champion after he took victory in Sunday’s highly charged final round of the season at Brands Hatch – shown live on ITV4. His title is also the first for the Westbourne Motorsport team in the championship…

Dorlin led all the way from the start, handling two Safety Car periods and also pressure from an assortment of drivers to achieve his sixth victory of the season.

With his chief rivals Paul Rivett (Epsom Downs) and Max Coates (Scorton) finishing third and fourth behind Daniel Rowbottom in second, the win was more than enough for Dorlin to clinch the crown.

However his title is provisional, pending the outcome of an existing appeal to UK motor sport’s governing body the MSA’s National Court by Rivett and his WDE Motorsport team, the date of which is still to be confirmed…

Meanwhile an elated Dorlin enthused: “This is the biggest achievement of my career so far, without a doubt. To win at this level in front of the British Touring Car Championship’s teams, crowds and the live ITV cameras and because of the very high level of competition that the Clio Cup attracts means it carries massive credibility.”

DRM driver Rowbottom (Kidderminster) meanwhile had won the first of the weekend’s two races – the season’s penultimate round held on Saturday – ahead of Team Pyro’s Bradley Burns (Farnham) in second and Dorlin in third.

Rowbottom’s second place in Sunday’s final round secured him fourth in the drivers’ championship behind Dorlin, Coates and Rivett. Although 17-year-old Burns was unable to finish it after again challenging for the win, he still ends up fifth overall and also Champion of the Graduates Cup class – for young drivers in their first full Clio Cup season.

Elsewhere, courtesy of the season-long efforts of Coates, Burns and Jack McCarthy (Bromley), Pyro has successfully defended its Entrants Trophy title for teams.

There were other star performances during Brands Hatch’s season finale: Jack Young (Belfast), still aged 16, became the youngest driver in history to start a UK Clio Cup race from the front of the grid after giving the MRM team its first pole position during Saturday morning’s qualifying session; Ben Colburn (Worthing) achieved his maiden top ten result in race one and followed that up with a first maximum score in the Graduates Cup in race two; WDE’s Sam Osborne (Worksop) ended his season on a high with a career-best equalling fifth place.

* Pending an outstanding appeal to the MSA National Court by Paul Rivett/WDE Motorsport.