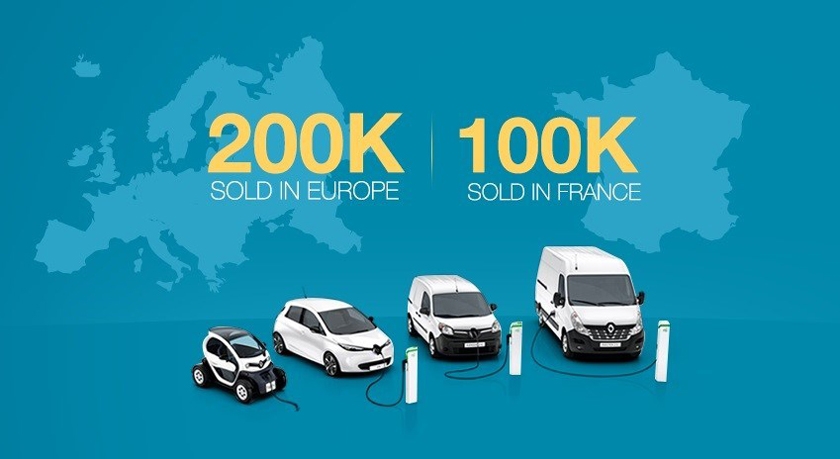 Boulogne Billancourt, February 26, 2019 - Renault has topped the 200,000 mark for sales of electric vehicles in Europe. At the same time, it has crossed a symbolic milestone in France with 100,000 vehicles registered. This double achievement underlines Renault’s position as leader in the European electric vehicle market, with steady growth in sales.

“Today, we are proud to say that over 200,000 customers in Europe have chosen Renault to make electric driving part of their everyday lives! And of course this is just a step on a far longer journey. Our clearly stated aim for the past ten years has been to make electric mobility available to everybody. Groupe Renault’s ambition is for electric vehicles to account for 10% of sales by 2022. To achieve this, it will build on the eight electric vehicles that will make up the range by this date,” says Gilles Normand, Senior Vice President, Electric Vehicles, Group Renault.

The reasons for this success? The most complete, versatile electric range on the market, made up of ZOE, Kangoo Z.E., Master Z.E. and the Twizy quadricycle.
The range receives continuous upgrades with, for example, increased range, more powerful motors or faster charging. It is built around two best-sellers: the city car ZOE and the Kangoo Z.E. van. ZOE remains the undisputed standard-setter on the market with 40,000 registrations last year, of which 18,000 in France. Building on six years of market success, it continues to appeal to buyers with an attractive design and a real range of 300 kilometers*.
Kangoo Z.E. is Europe's undisputed leader in electric LCV sales, with market share of 51.5% in 2018.

In June 2018, Groupe Renault announced plans to invest over one billion euros in France, now a center of excellence for electric vehicles within the Alliance. By 2022, the Group plans to:

To find out more about Groupe Renault’s electric strategy: easyelectriclife.groupe.renault.com

* over a WLTP homologation cycle