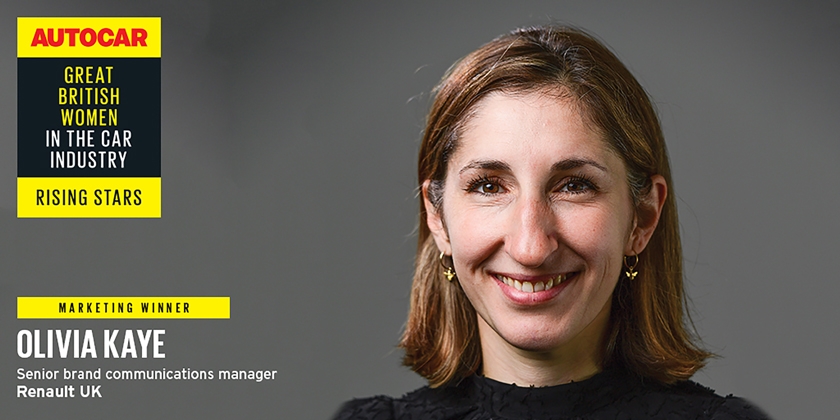 Two British Groupe Renault employees have been named in Autocar’s annual Top 100 Great British Women in the Industry listing for 2019. Senior Brand Communications Manager, Olivia Kaye has been named as the winner in the Marketing category, while Verity Mercer has been nominated for the second consecutive year in the new Mobility and Digital category. Both were selected for their achievements in the industry so far and for the inspiration they provide to future generations looking to follow in their footsteps.

Celebrating the achievements of some of the most influential individuals in the global automotive sector, Autocar’s Top 100 Women in the Industry list is compiled in association with the Society of Motor Manufacturers and Traders, and is backed by a large number of car manufacturers and considers individuals working in eleven key areas: Executive, Sales, Marketing, PR & Communications, Operations, People Development, Manufacturing, Vehicle Development, Aftersales, New Mobility and Digital Solutions and Apprentice. In each category all those named have not only demonstrated strong achievements in their careers so far but have also proved to be an inspiration for those looking to follow in their footsteps.

Olivia Kaye’s win in the Marketing category comes just over a year after joining Groupe Renault - her first role in the automotive industry. Currently leading brand communications for Renault in the run up to the launch of the All-New Clio, Olivia previously led the Dacia marketing team where she spearheaded both the launch of the new Duster and the creation of the successful Dacia Buy Online platform. Before joining Groupe Renault in May last year, Olivia had worked in senior positions at a number of key brands, including Absolut Vodka, Electrolux and TBWA’s STREAM brand content and entertainment division.

Verity Mercer returns to the list for her work in the new Mobility and Digital Solutions category, which has been created to recognise achievements in this rapidly evolving part of the industry. Previously recognised for her achievements in Marketing, Verity recently returned to the UK after a four-year spell in France to head up Groupe Renault UK’s Customer Relationship Management and Digital Experience team, where she is focussed on making improvements to the online customer experience. Verity started her career with Groupe Renault as a graduate trainee in 2001, after completing her degree in in French, German and management from the University of East Anglia.

Groupe Renault has a strong commitment to diversity in the workplace, including a proactive policy in favour of equal opportunities for women and men across the company.

Convinced that gender diversity fosters performance, innovation and motivation, Renault launched its Women@Renault plan nine years ago in order to increase the proportion of women working at every level of the company. The scheme is founded on a human resources plan and an in-house social network.

Due to this ambitious programme, women accounted for 24.8 per cent of the Group’s staff at the end of 2017 (compared with 10 per cent in 1999). This diversity is found at every level of the company, from the shop floor to the Group Executive Committee, and the current proportion of female staff is particularly high for the automobile industry.

From the outset, the Women@Renault plan has also featured a multi-profession, in-house, mixed-gender, international social network where women and men alike can trade opinions and ideas on subjects such as gender diversity and training- and career management-related best practices.