Franco Colapinto wins the first race of the season at Monza 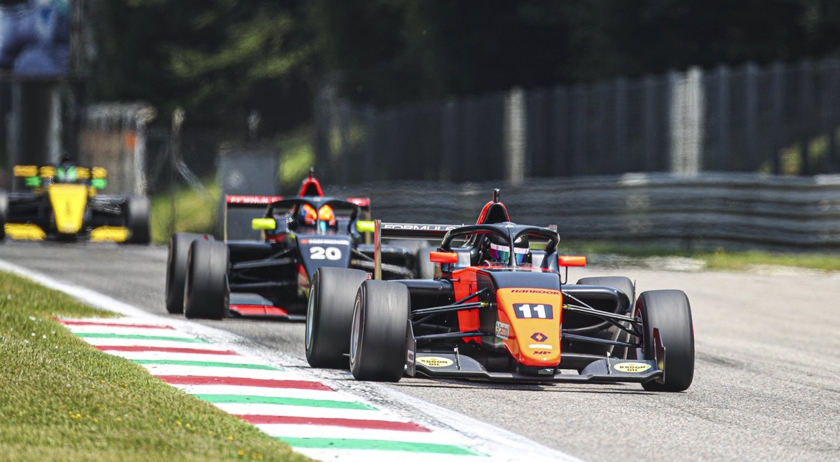 From fourth on the grid, Franco Colapinto (MP Motorsport) made a strong start and a perfect restart to be the first to write his name in the record books of season 50 of Formula Renault at the Autodromo di Monza. Despite contact with Victor Martins (ART Grand Prix) on lap seven, the Argentinean won ahead of pole man Alex Quinn (Arden Motorsport), winner among the rookies, and Renault Sport Academy driver Caio Collet (R-ace GP).

Following the first qualifying session Thursday, the Formula Renault Eurocup field began Friday with another session to determine the grid for race one.

Quick Quinn under the checkers

In what was an even more intense session than yesterday, Alex Quinn took his first pole position, the first for Arden Motorsport in the category since Daniel Ticktum at the Hungaroring in 2017

After a hard-fought beginning, the session was interrupted by a red flag caused by Ugo de Wilde (Arden Motorsport) with six minutes remaining on the clock. When the track went green, Tijmen van der Helm (FA Racing) was successively dislodged by Joey Alders (MP Motorsport), Alex Quinn and Victor Martins before Alex Quinn set the best time of 1:47.438s on his final lap.

Despite a threat from Tijmen van der Helm when the lights went out, Alex Quinn held on the lead at Variante del Rettifilo while the Dutchman was overtaken by Franco Colapinto at the entry to the chicane, then by Victor Martins and Caio Collet.

The gap among the leading trio was less then a second when the safety car was brought on lap five to allow for the removal of the car of William Alatalo from the gravel trap. At the restart, Alex Quinn pulled away while the battle heated up between Franco Colapinto and Victor Martins. However, the Frenchman came out on the short end of the stick with a damaged front-wing. A second full-course yellow occurred when Joey Alders ran into Paul Aron (ART Grand Prix). The Dutchman received a four-place grid penalty for tomorrow’s race for causing the incident.

When the Renault Mégane R.S. returned to the pits, Franco Colapinto stayed in striking distance of Alex Quinn and found an opening at Variante della Roggia. The Briton tried to answer back, but his attempts worked into the plans of Caio Collet, who tucked into his slipsteam.

Franco Colapinto won ahead of Alex Quinn, winner of the Hankook Trophy reserved for the highest finishing rookie, and Caio Collet, who has now finished in the top ten in 20 consecutive races.

The duel for fourth place was won by Tijmen van der Helm. The Dutch driver lost position to Michael Belov four laps from the end but the Russian made a mistake on the following lap. In the very last seconds of the race, Amaury Cordeel (FA Racing) took sixth place from Hadrien David (MP Motorsport), who had earlier done the same. Starting from the very back of the grid, Ugo de Wilde moved up to eighth place ahead of Petr Ptáček (R-ace GP) and Victor Martins, who picked up the final point on offer despite making a trip to the pits.

Race two of the first meeting of the season will take place on Saturday at 9:45. Victor Martins will start from pole ahead of Caio Collet, Amaury Cordeel, William Alatalo and Alex Quinn.

Franco Colapinto (MP Motorsport): "I’m very happy to win the first race of the season. I have had an extremely fast car since the beginning of the week and I was disappointed to only qualify fourth this morning. I didn’t manage to put it all together, but I was able to make up for it this afternoon despite a rather disastrous first restart! No one is more surprised than I am by this result and I really didn’t expect it. I would like to thank MP Motorsport for the incredible job they have done and Bullet Sports Management who did everything they could to make sure I could be here. Now we have to do it again tomorrow, starting from sixth position!"

Alex Quinn (Arden Motorsport): "This morning, everything went perfectly. We were a bit behind at the beginning of the week, but we bent over backwards to do our qualifying perfectly and then battle for the win this afternoon. The car was great and I worked extremely hard with my engineer and the team, but I couldn’t do very much against Franco’s excellent restart. Tomorrow we will start a little further down the grid but I am confident in our pace."

Caio Collet (R-ace GP): "We maximised qualifying this morning and it’s not that bad to finish on the podium after starting sixth. We still lack a little bit of pace compared to Franco who was the fastest driver on track today. We will continue to work hard to fight for the win tomorrow. It was also good to be back racing and I would like to thank R-ace GP, the Renault Sport Academy and my partners for supporting me during the long break and I am thrilled to bring them a podium finish."