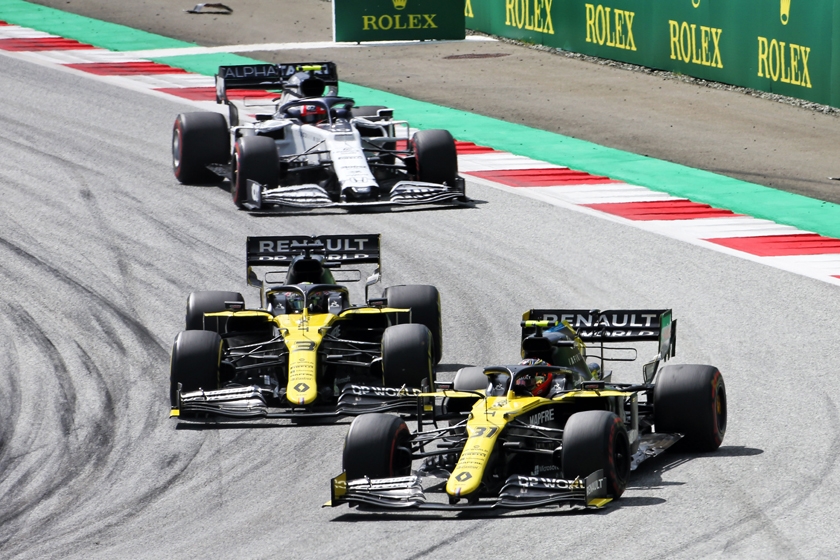 After starting from fifth place, Esteban began on Pirelli’s Soft tyres. He lost a position on lap one before holding onto sixth place in the early part of the race. But, after Daniel passed him on lap 19, the Frenchman was forced to retire six laps later as a result of a cooling issue on his Renault R.S.20.

Daniel started from eighth on Medium tyres and, after overtaking Esteban, set his sights on a top six finish. He progressed to fifth after his pit-stop for Softs on lap 37.

After a battling effort to hold on to sixth place, Daniel was forced into evasive action to avoid a collision at Turn 3 three laps from the chequered flag. The move relegated Daniel from sixth to eighth and he narrowly missed snatching the position back at the final corner.

"We certainly hoped for more today. I had a good start and made some decent progress up the order. The Mediums felt good on our first stint, but when we put the Soft on it wasn’t as quick as we’d hoped, and it didn’t really give us as much as we’d thought. The end of the race was frustrating, and I was struggling to hold on to the position on the last couple of laps. On the incident, I did see Stroll coming but I felt if I turned in, we would have crashed, so I had to make that call. I maybe should have blocked him and it’s a shame to lose a couple of positions from that one moment. The overriding feeling is frustration, but we’re up and running for the season now."

"We had a cooling issue with the car and that was very unfortunate. These things happen in motorsport, but we know we had a great opportunity today and it’s a shame where we were running to retire the car. Hopefully it won’t happen again this year. It was good to have some fun with Daniel; we were both on different strategies and I think he had a bit more on tyres. We looked on for a good team result, so it’s a shame what happened. We have another opportunity next week to score some points."

"Lots of emotions after a weekend like this one. We had good emotions after qualifying yesterday with both cars reaching Q3 and Esteban who showed a very strong pace in extreme conditions, demonstrating his outstanding driving skills in his second qualifying with us. Today, the emotions were much more painful after another retirement for one of our cars caused by exactly the same issue as last weekend. We had put lots of effort to return, examine the parts in Enstone, and send it back to the track, but clearly there is something that we missed. This poor level of reliability is, obviously, not acceptable in a field that is so tight. The race also showed that we need a bit more pace against our direct competitors. Daniel had a good race and he did well to defend for so long. Overall, the prevailing feeling is one of disappointment, however, we should not deter from the fact we’ve improved massively at this track compared to previous years. The car has made huge steps forwards but so have the other teams. Now it’s gloves off for the rest of the season."