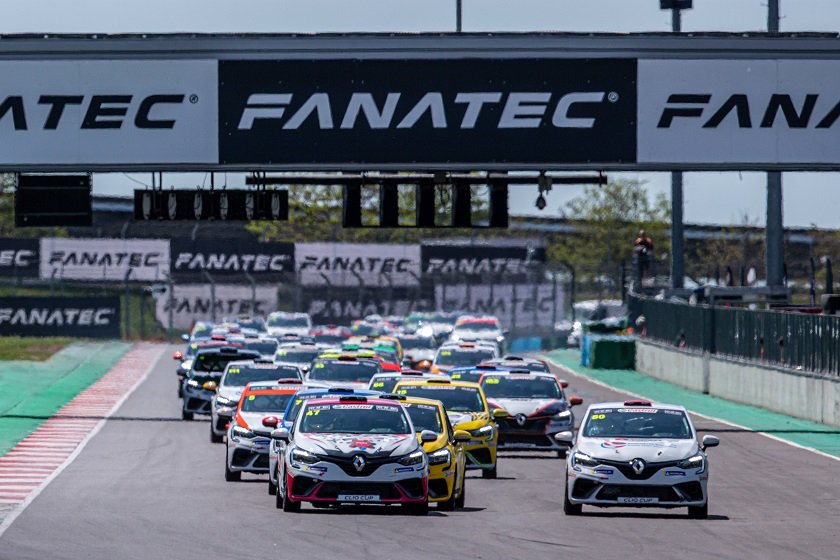 While Milan Compétition set the pace in practice, first with Nicolas Milan on Thursday evening, then Anthony Jurado on Friday morning, Dorian Guldenfels came out on top in qualifying for race one.

The 2019 Clio Cup France winner set off ahead of Nicolas Milan and Marc Guillot. Fourth on the grid, Kévin Jimenez (GPA Racing) was the best-placed Challenger ahead of Anthony Jurado (Milan Compétition) and David Pouget.

When the lights went out, Nicolas Milan ran alongside Dorian Guldenfels and moved into the lead at the Adélaïde hairpin. Kévin Jimenez slotted in between the two before the safety car was deployed to allow for the removal of the damaged Clio Cup of Lionel Viguier (TB2S).

Despite the return of David Pouget and his attacks right up to the penultimate corner, Nicolas Milan kept the lead to take his second Clio Cup Europe win of the season. Marc Guillot completed the podium by getting the better of Dorian Guldenfels and Anthony Jurado, who was relegated to 19th position after a penalty for not respecting the track limits.

Thibaut Bossy (TB2S) inherited fourth place, and was followed by Alexandre Albouy, who put in an impressive comeback drive to take the laurels in the Challengers Cup ahead of Mathieu Lannepoudenx (Milan Compétition) and Kévin Jimenez. Jordi Palomeras (GPA Racing) and Mickaël Carrée (T2CM) rounded out the top ten. Laurent Dziadus (Team Lucas) took command of the Gentleman Drivers Cup on lap seven and went on for the win ahead of "Horn" (GPA Racing) and Javier Cicuendez (Team VRT).

In the general classification, David Pouget still leads with a 39-point advantage from Nicolas Milan and is now 55 points to the good from Marc Guillot. In the Challengers Cup, Kévin Jimenez now leads Alexandre Albouy by 33 points while "Horn" moves to the top spot in the Gentlemen drivers Cup with a five-point lead over Laurent Dziadus.

Round two of Group B also saw Nicolas Milan win. Nicolas Milan added to his advantage in the general classification in taking the lead of the race on lap one before keeping at bay his closest rival, David Pouget, who is now 17-points behind. Pole winner Dorian Guldenfels ended third.

As in Clio Cup Europe, Alexandre Albouy and Mathieu Lannepoudenx made the most of the spin of Kévin Jimenez to gain position and close the gap in the Challengers Cup. It was the same scenario in the Gentlemen Drivers Cup with Laurent Dziadus taking the lead on lap seven then went on for the win ahead of "Horn", who is the new category leader following the retirement of Lionel Viguier, and the Spaniard Javier Cicuendez.

Also entered in Group D In addition to Group B, Nicolas Milan and David Pouget ran at the sharp end of the order in this first race on the calendar. In this classification, they are followed by the new leader in the Challengers Cup, Alexandre Albouy, who finished ahead of Mathieu Lannepoudenx and Kévin Jimenez.

Leader for a large portion of the race in the Gentlemen Drivers Cup in this group, Stephen Polderman (Chefo Sport) ceded to "Horn" at half-distance. The Frenchman scored the victory ahead of Javier Cicuendez, who got past the Dutchman late in the race.

The Clio Cup Europe will be back in action tomorrow for the second qualifying session at 11h20 before race two of the weekend at 17h50.