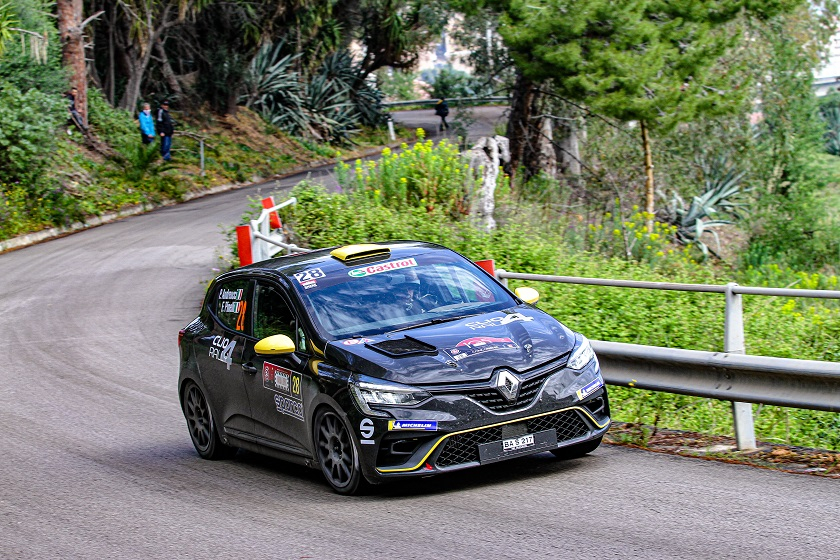 This week, the Clio Rally4 made its competition debut on the Targa Florio – Rally Internazionale di Sicilia. Entrusted to Paolo Andreucci and HK Racing, the latest model designed by the teams at Viry-Châtillon and Dieppe shows tremendous potential to be confirmed soon.

The long-awaited competition debut of Clio Rally4 was preceded by two days of testing on Sicilians atypical and undulating roads.

On Tuesday and Wednesday, the 11-time Italian national champion and co-driver Francesco Pinelli had their first go in the Clio Rally4. They put in 338 kilometres on both dry and wet roads to test some set-ups for the event and the future of Clio Rally4.

On Friday, the Targa Florio – Rally Internazionale di Sicilia got underway with just one special stage.

Clio Rally4 led its category from the outset before Paolo Andreucci was again quickest the following morning on SS2. Demonstrating the efficiency of its chassis and 4-cylinder 1330cc TCe 16-valve engine, Clio Rally4 set the fastest time among the two-wheel-drive cars before losing around 30 seconds with a minor contact on SS4.

Using the rally as a full-scale test thanks to its experience, the crew continued to work on set-up during the two services while also battling at the sharp end of the order before a drop in power caused by a mounting error forced them to retire on SS8.

Despite this premature end, Clio Rally4 made a strong impression on competitors and spectators alike who came to get a close look at the new model from Renault’s customer racing department.

In parallel, round two of the Clio Trophy Italia was held on the same stages. The Clio Rally5s were extremely competitive with four different leaders in the opening four stages before David Nicelli and Tiziano Pieri went on to win by 1.7s ahead of Giovanni Marco Lanzalaco and Antonio Marchica.

Paolo Andreucci : "The Targa Florio is an atypical rally with very different characteristics from most other events. This choice for the debut of Clio Rally4 clearly showed the desire to come out swinging from the start with a ’hard’ development. I was impressed with Clio Rally4. You can feel every change or adjustment to the set-up through new feelings, which highlights the excellent work done on the chassis. The two days of testing allowed us to explore several options, including on wet roads. Although the debut of a car can come with some unpleasant surprises, the potential of Clio Rally4 is clearly evident and we have shown that the performance is there."

Benoît Nogier, Customer Racing Director : "From the outset, Clio Rally4 confirmed the great potential we had seen during its design and development phase. On its first rally, Clio Rally4 took the lead in its category and then briefly led the two-wheel-drive class before Paolo’s minor error. That contact and the issue in the final loop prevented us to score a good result, but the journey is just beginning. We are already looking forward to fulfilling all its potential in its upcoming appearances !"