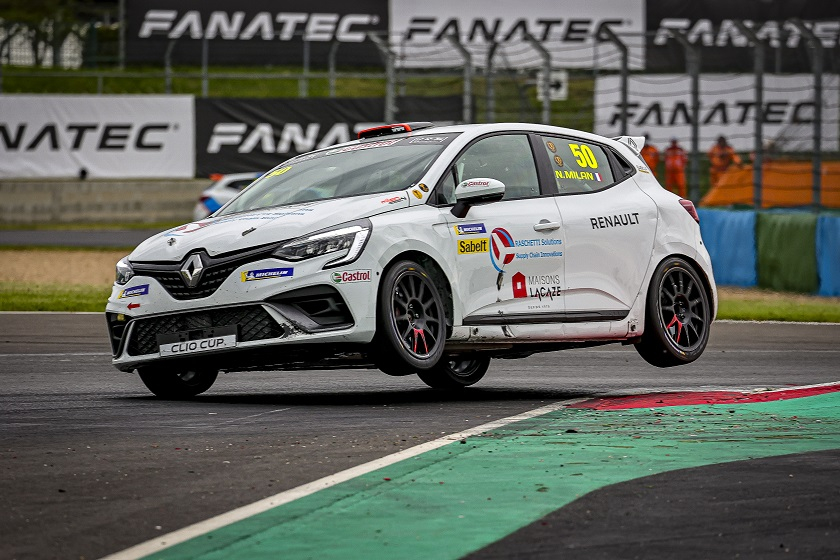 Following a duel that wasn’t decided until the chequers waved on Saturday, Nicolas Milan and David Pouget continued their mano-a-mano in qualifying. David Pouget got the better of his rival on his final attempt while Kévin Jimenez claimed the third spot on the grid.

Given the success of the Clio Cup Europe, which brought together 38 competitors at Magny-Cours, the race started after one lap behind the safety car.

While David Pouget initially held on to his advantage, Nicolas Milan took the lead under braking at the Adelaide hairpin before his rival answered back at the same place on the following lap.

At the restart, David Pouget kept the advantage, but with four laps to go Nicolas Milan attacked at Château d’Eau. Marc Guillot took advantage of the situation and caught up to them before the Lycée bend, where Nicolas Milan took the lead for good. Once clear of the chase group, Nicolas Milan created a gap to Anthony Jurado (Milan Compétition), who managed to surprise David Pouget, then Marc Guillot.

Nicolas Milan sealed his second win of the weekend in the Nièvre ahead of Anthony Jurado and Marc Guillot, who received a ten-second penalty for track limit violations. David Pouget and Challenger Kévin Jimenez were then promoted to the podium.

Beaten twice by Nicolas Milan this weekend, David Pouget still leaves Magny-Cours with the Clio Cup Europe leadership ahead of Nicolas Milan and Marc Guillot. Kévin Jimenez extends his lead in the Challengers Cup while Laurent Dziadus moves to the top of the Gentlemen Drivers Cup general classification.

As the leading trio was also entered in Group B and D, Nicolas Milan scored a triple against David Pouget and Kévin Jimenez. Victorious in the Challengers Cup, Kévin Jimenez was joined on the Group B podium by Alexandre Albouy and Jerzy Spinkiewicz while third place went to Spain’s Alejandro Schimpf in Group D.

In the Gentlemen Drivers Cup, Laurent Dziadus won Group B ahead of "Horn" (GPA Racing) and Fabien Julia (LR Performance). His absence in Group D allowed "Horn" to leave Magny-Cours as a winner ahead of Dutchman Stephan Polderman (Chefo Sport) and Spaniard Joaquin Rodrigo (Vearsa Sport).

With three straight wins in Group B, Nicolas Milan leads the general classification ahead of David Pouget and Kévin Jimenez, who holds onto the lead in the Challengers Cup ahead of Alexandre Albouy and Mickaël Carrée. Laurent Dziadus took over the top spot from "Horn" in the Gentlemen category.

Thanks to his perfect score in the first meeting for Group D, Nicolas Milan also leads the way ahead of David Pouget and Kévin Jimenez, who is actually sitting behind Alexandre Albouy in this Group’s Challengers category. Lastly, "Horn" is the first leader of the season ahead of Stephane Polderman (Chefo Sport) and Javier Cicuendez (Team VRT).

Mehr in dieser Kategorie: « Clio Rally4 shows its potential RENAULT SCENIC: INVENTION AND RE-INVENTION - Designed from the Inside Out (episode 1) »
Nach oben