Three races in Budapest to increase the tension 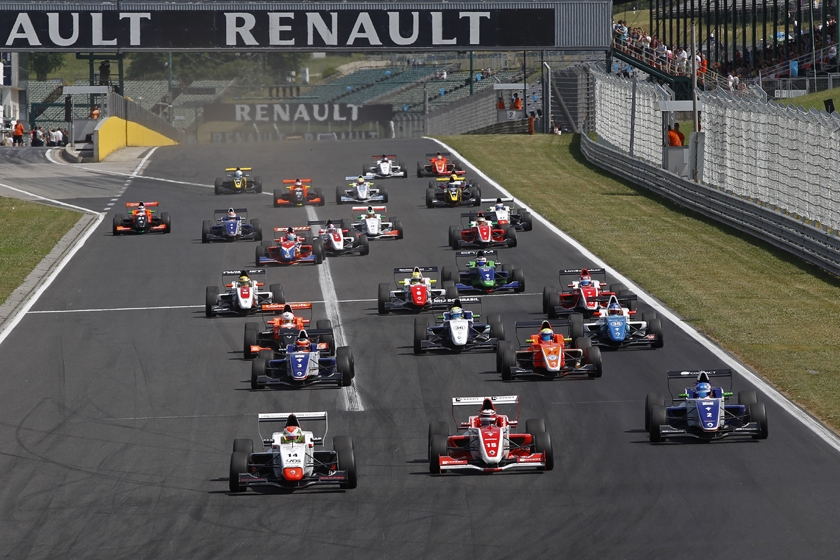 After a month-long break, the Formula Renault Eurocup returns to action in Budapest. The Hungaroring will host round five of the season and the first three-race weekend of the season. This will be an opportunity for the contenders to pull away or pick up precious points in the title fight!

The home of the Hungarian Grand Prix makes its return to the Formula Renault Eurocup calendar with three races on offer. The field will have a day of testing on Thursday to get accustomed to the tight and twisty circuit that won’t allow them a moment to catch a breath just until Sunday, when the successors to past winners in Hungary Brendon Hartley, Daniel Ricciardo, Jean-Éric Vergne, Robin Frijns, Daniil Kvyat and Jack Aitken, will be known.

The fight for the title is tightening

With his win in Monaco, Will Palmer (R-ace GP) moved back to the top of the Formula Renault Eurocup classification. The Englishman will rely on his knowledge of the Hungarian track, but Robert Shwartzman (R-ace GP) and Sacha Fenestraz (Josef Kaufmann Racing) will try to counter.

Last year, the Russian scored his first podium result in Formula Renault NEC there. For his part, the Frenchman wants a repeat of his 2015 double-podium at Budapest when he was racing in the French F4 Championship to continue the momentum following his win in Monaco.

Max Defourny (R-ace GP) also raced last year at Budapest in the NEC. A bit further down the in the standings, the Belgian driver wants to make the most of the three races to distance himself from Alex Peroni (Fortec Motorsports) and to take his first win since Motorland in 2016!

As the mid-season nears, six other drivers will be on familiar ground as they try to close the gap. Twice winner at the season opening round of the Formula Renault NEC at Monza last weekend, Gabriel Aubry (Tech 1 Racing) returns to the Hungaroring where he won at in 2015. Alexey Korneev (Fortec Motorsports) was too on the podium then before taking two top ten results last year in NEC. Portugal’s Henrique Chaves (AVF by Adrián Vallés) will also be eager to score points after four retirements in the last five races.

Yifei Ye (Josef Kaufmann Racing) has also already raced at the Hungaroring and will rely on his knowledge of the track to catch up to the rookie in the Renault Sport Academy Max Fewtrell (Tech 1 Racing) and first-year drivers from the Red Bull Junior Team Daniel Ticktum (Arden Motorsport) and Richard Verschoor (MP Motorsport), both of whom have never raced in Hungary before.

For their part, Axel Matus (AVF by Adrián Vallés) and Julia Pankiewicz (Mark Burdett Motorsport) will draw on their experience of the Hungarian circuit to score their first points of the season.

Bounce back and re-enter the fray

Thomas Randle (AVF by Adrián Vallés), who won the Toyota Racing Series earlier this year, will make his debut in the category as will wild-card driver Bartłomiej Mirecki (BM Racing Team), who last weekend took his first podium finish in Formula Renault NEC.