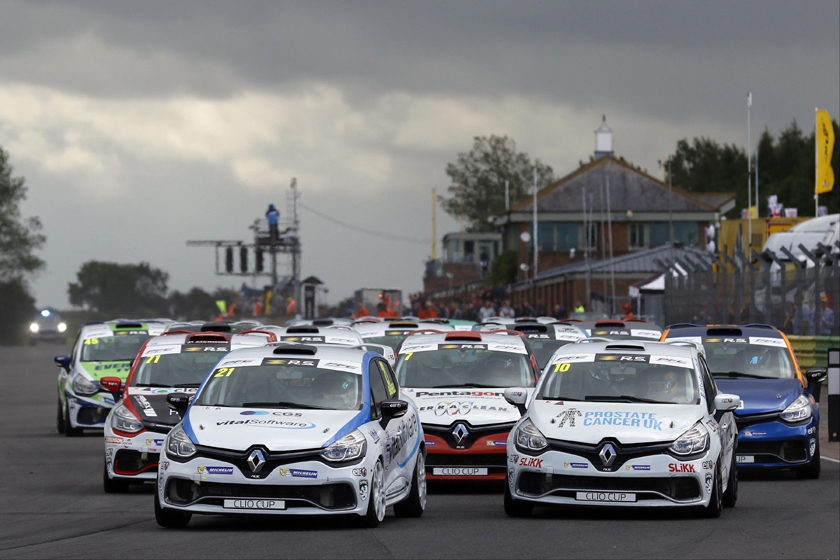 After a lengthy summer break there’s little more than a week to go before 2017’s action-packed Renault UK Clio Cup season resumes alongside the high profile British Touring Car Championship – this time at the longest circuit on its calendar, Snetterton in Norfolk (Sat 29/Sun 30 July).

Bushell the stand-out act so far…
Leading the UK Clio Cup standings at present is Mike Bushell (Tunbridge Wells). An impressive 69-point advantage means that whatever happens at Snetterton he will still be leading as they leave on the Sunday night…

Notably 2014 Champion Bushell has won five out of the ten races so far and started eight of them from pole position. Only once has he finished off the podium. A maximum of 68 points is up for grabs from Snetterton’s two races. Six more races then remain – two each at Rockingham, Silverstone and Brands Hatch. The opposition has much to do…

Chase is on for Drivers’ & Teams’ titles
Bushell’s closest rivals at present are Lee Pattison (Halifax) and Paul Rivett (Epsom Downs) – their WDE Motorsport squad also eager to regain the lead of the teams’ championship after being usurped recently by Bushell’s Pyro outfit.

Rivett holds the Snetterton race lap record but this could be under threat with the UK Clio Cup having switched this year to a grippier, more durable Michelin tyre.

Rapid locals among competition
WDE’s Dan Zelos (Dereham) will be looking to convert his season-long promise into a maiden podium result on home ground. Similarly Pyro’s Lucas Orrock and SDR’s Shayne Deegan – the two Cambridge drivers have been rapid on occasion.

Following breakthrough top-three finishes at Oulton Park and again at Croft – results that have hoisted them up the leaderboard – Pyro’s Nathan Harrison (Oxford) and DRM’s Daniel Rowbottom (Kidderminster) both now sense a first win. Pyro’s Jack McCarthy (Bromley) – like Dorlin, another of 2017’s teen sensations – is also closing in on a big result. The Harrison-Dorlin-McCarthy scrap for honours in the Graduates Cup for young, first-year drivers is another battle worth following.

Graham Field (Southwell) adds to JamSport’s line-up while Sam Randon (Ashbourne) enjoys a second outing alongside Dorlin in the Westbourne line-up. Randon is one to watch after showing great speed on his category debut at Croft. Meanwhile another local, Norwich’s Shawn Taylor, has his second outing of 2017 with his own STR set-up.

Where and when to watch
The Renault UK Clio Cup’s drivers will first be on track at Snetterton on the Friday (28 July) for two timed test sessions, allowing them to fine-tune their cars to the circuit’s characteristics. At 11:30 on Saturday comes the crucial half-hour timed qualifying session which will determine their starting grid positions for the two races (rounds 11 and 12 of the championship). These both take place on the Sunday, at 10:40 and then 17:45. Both races are ten laps in duration. As ever the event will be broadcast live on the Sunday on ITV4, from 10:45-18:00.