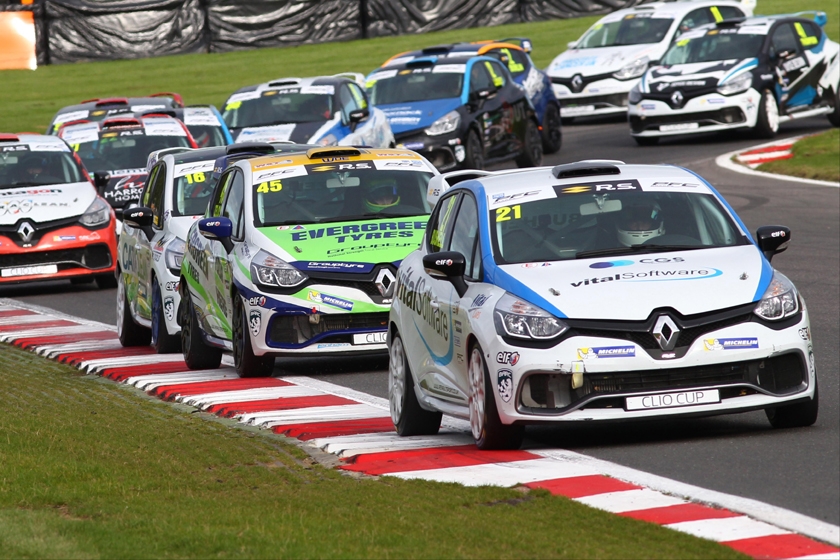 Team Pyro’s Bushell, crowned Champion in Silverstone’s penultimate rounds a fortnight ago, had already made it 12 pole positions for the season when he came out on top in Saturday morning’s qualifying session and in both races he was able to take full advantage and lead all the way from the start.

In race one however he had to do it all over again after the initial start was red-flagged following a heavy accident involving four cars as the pack launched away from the grid. Each of the four drivers involved – Pyro’s Bradley Burns (Farnham), Ciceley Motorsport’s Jade Edwards (Aylesbury), WDE Motorsport’s Sam Osborne (Worksop) and STR Norwich’s Shawn Taylor (Norwich) – were unharmed.

At the second attempt Bushell took the lead into the first corner and led every lap for his first win on the Brands Hatch GP circuit although he was under pressure throughout from DRM’s Daniel Rowbottom (Kidderminster) and WDE’s Zelos.

Rowbottom though was to receive a time penalty which demoted him down the order and promoted PP Motorsport/Westbourne’s James Colburn (Worthing) to third place in the final result. During the race Ciceley Motorsport’s Max Coates (Scorton) set a new lap record – shattering the previous best by a second.

In race two – shown live on ITV4 on Sunday as part of the channel’s extensive British Touring Car Championship coverage – Bushell did exactly the same. Likewise Zelos who, having never finished inside the top three before, took another second place to make it two podium results in one event. Third place thanks to a bold opening lap move was Pyro’s Jack McCarthy (Bromley).

It was also in race two that Pyro’s Harrison was able to wrap up the Graduates Cup title for young drivers in their first full seasons in the UK Clio Cup as his chief rival, Westbourne Motorsport’s James Dorlin (Barnsley) who had closed right in on points, this time hit trouble.

Brands Hatch’s season finale threw up other notable performances, namely those of Burns and fellow Pyro driver Zak Fulk (Guildford) – both just 16 years old and in only their third UK Clio Cup events. Although Burns’s weekend was ended by race one’s start line accident, prior to that he had qualified a sensational second fastest for both grids. Fulk meanwhile shone with a great recovery drive in race two in which he set the fastest lap time.