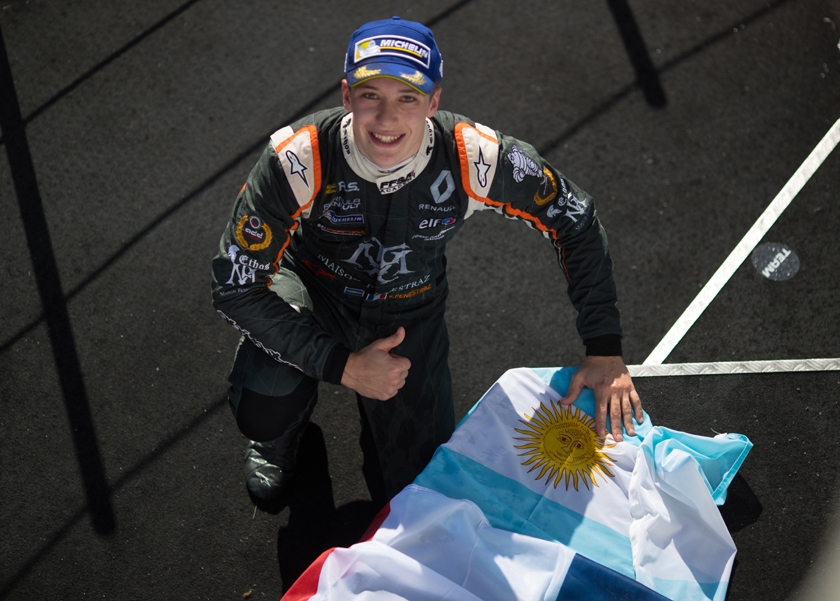 The final two races of the season at Circuit de Barcelona-Catalunya were won by Sacha Fenestraz and Robert Shwartzman (R-ace GP).With the title sewn up, Sacha Fenestraz (Josef Kaufmann Racing) follows Lando Norris in the Formula Renault Eurocup record books and he will join the Renault Sport Academy.

Saturday afternoon, Robert Shwartzman and Sacha Fenestraz each claimed a pole position and shared the front row ahead their main rivals.

The win for Shwartzman, the title for Fenestraz

This morning, Robert Shwartzman held on to the lead ahead of Sacha Fenestraz. Further back, contact between Max Defourny (R-ace GP) and Gabriel Aubry (Tech 1 Racing) set off a chain reaction eliminating 13 drivers.

Following a red flag period, the race resumed behind the safety car. At the re-start, Sacha Fenestraz tried in vain to get the better of Robert Shwartzman before the neutralization provoked by the incident between Neil Verhagen (MP Motorsport) and Raúl Guzmán (R-ace GP).

The Ferrari Driver Academy driver Shwartzman steadily pulled away to take his sixth win of the season. Sacha Fenestraz finished runner-up, which was enough to clinch the title. Like the day before, Richard Verschoor won in the rookie class and stepped on to the podium for the first time in finishing ahead of Renault Sport Academy drivers, Max Fewtrell (Tech 1 Racing) and Jarno Opmeer (MP Motorsport), as well as Will Palmer (R-ace GP).

In the afternoon, Sacha Fenestraz fended off the attacks of Robert Shwartzman just after the lights went out. The two were followed by Max Defourny, Will Palmer and Richard Verschoor, who got the better of Max Fewtrell. Following the intervention of the safety car provoked by Ghislain Cordeel (Arden Motorsport) and Presley Martono (Mark Burdett Motorsport), the order at the front remained unchanged.

In control of the race from start to finish, Sacha Fenestraz won for the seventh time this season ahead of the R-ace GP trio of Robert Shwartzman, Max Defourny and Will Palmer. Despite a last ditch attempt by Max Fewtrell, Richard Verschoor was once again top of the class among the rookies. Gabriel Aubry passed his team mate, who took rookie of the year honours at the end of the race. Alex Peroni, Jarno Opmeer and Alexey Korneev (Fortec Motorsports) completed the top ten.

Sacha Fenestraz (Josef Kaufmann Racing): “First, I want to thank the team for the incredible job they have done throughout the year. It is fantastic to finish with a win, like last year. Even though Robert was very fast this weekend, I was able to hold him off this afternoon. This title is the reward for enormous efforts and sacrifices that have been made, and I had a lot of fun on the track. Our consistency over the course of the season paid off and we were fast when it counted. I am on cloud 9 with the idea of joining the Renault Sport Academy!”

Robert Shwartzman (R-ace GP): “I believe this is the first time I have won two races on the same weekend! Having said that, this morning was a little more difficult than yesterday, but it was a great battle with Sacha. I had to defend and cope with the neutralizations before progressively pulling away. This afternoon, it was up to me find a hole. I gave it my all, but it wasn’t to be! It is a shame that the season went by so fast. A big thank you to R-ace GP, SMP Racing, the Ferrari Driver Academy and Renault for everything that I learned this year alongside them.”

Richard Verschoor (MP Motorsport): “This was by far my best meeting of the season. I am thrilled and even if these results have come a little late, better late than never! We worked hard and never gave up. This weekend, the pace was good and I was able to stay out of trouble. I was able to attack Sacha this morning and resist Fewtrell this afternoon. Now, I hope to return for a second season in the Formula Renault Eurocup.”

Max Fewtrell (Tech 1 Racing): “This rookie title is clearly a bonus. Of course, it is not the championship all the drivers aspire to win, but winning it underscores our performance in this maiden season in the Formula Renault Eurocup. The field was made up of some incredible drivers and I was still able to take my first win and fight for podiums. I hope I can use this opportunity next year to aim for the title."