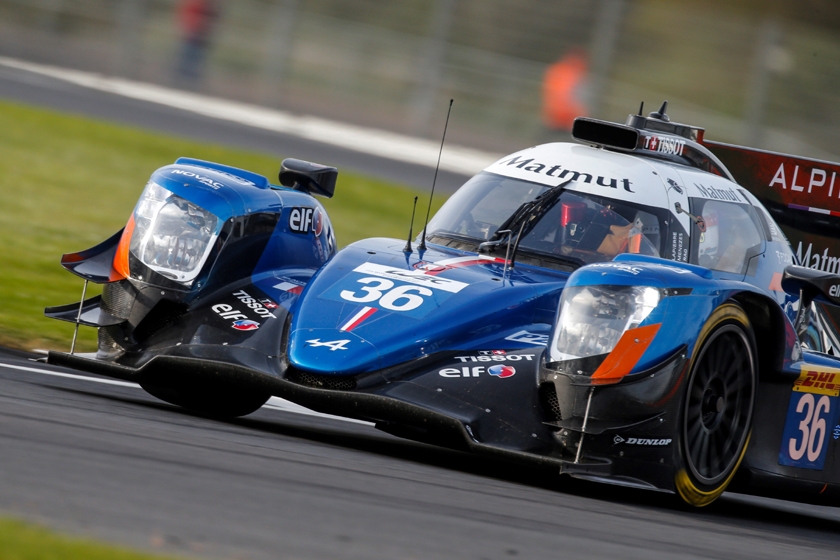 • The FIA World Endurance Championship (WEC) today with the 6 Hours of Silverstone (United Kingdom).
• The Alpine A470 of Nicolas Lapierre/Gustavo Menezes/Matt Rao finished the opening race of the 2017 season in fourth position.
• Signatech Alpine Matmut dominated the majority of the race, but the team's strategy was undermined by the intervention of the safety car.
• Two Alpine A470s will be competing at the next round, which will be held on 6 May at Spa-Francorchamps (Belgium).

Contested on a dry track, the three free practice sessions enabled the team to fine-tune the set-up of the Alpine A470. In qualifying, Signatech Alpine Matmut waited before showing its hand. The last car to take to the track, the no.36 was driven in turns by Matt Rao and then Nicolas Lapierre. Based on the average of their fastest laps, the Alpine drivers grabbed the second best time, just 46/1,000ths off pole position!

At the start of Sunday's race, the weather remained mild and dry, although rain was forecast for early afternoon. When the race got under way, Nicolas Lapierre took the early lead in the LMP2 class. Whilst looking after his tyres, the French driver wasted no time in putting daylight between himself and his rivals.

At the end of his double stint, Nicolas handed over driving duties to Gustavo Menezes. The Californian gradually extended his lead. After 2 hrs 30 mins, whilst leading by thirty or so seconds, Gustavo encountered the first proper shower of the race. He nonetheless managed to stay on track without coming in for treaded tyres, completing his triple stint just as yellow flags were shown for the first time, as the race came under "full course yellow".

As Matt Rao headed out on track, he was more than a minute ahead of the rest of the LMP2 field. But this patiently built-up lead dwindled to nothing during a long safety car period. When racing resumed, the Silver category driver initially managed to contain his challengers. Struggling with his tyres, he was eventually no longer able to hold off Vaxivière (no.28) and Laurent (no.38). Despite coming into the pits to change the front left-hand tyre – subject to considerable stress on the English track – he continued to struggle with the handling of the car.

For the closing stages of the race, Nicolas Lapierre took over driving duties again in the A470. Fifth with 1 hr 20 mins to go to the chequered flag, he summoned all his strength for one final push. After quickly gaining a position, Nicolas was then hit by gearbox issues. At that point, the team decided to play it safe and content themselves with fourth position.

Bernard Ollivier, Alpine Deputy Managing Director
"The result of the race is frustrating, but it also goes to show that you can't take anything for granted. It was something of an emotional roller-coaster ride for us during the six hours. After leading by more than a minute, the way the pit stops and safety car periods played out meant that we found ourselves down in fifth place. We have sweated blood and tears to finish fourth, but we certainly deserved better. Yet again, we've not had the rub of the green at Silverstone! In any case, this weekend confirms that competition is stiff and the standard of the LMP2 has gone up another notch this year. We'll go to Spa-Francorchamps even more determined to do well and with two Alpine A470s to fight for victory!"

Philippe Sinault, Signatech Alpine Matmut Team Principal
"We opted for an aggressive strategy, which paid off for the first half of the race. After the safety car period, we found ourselves at the start of a whole new race… but without fresh tyres and without our Silver driver having had his stint. Matt took over in tricky conditions, driving on slick tyres with the track still damp and the rest of the field breathing down his neck. He pushed hard to defend his position, but that damaged his tyres and lost us even more time. I'd prefer to concentrate on the positive aspects of the race, the fact that the commitment of the team, our pace and strategy allowed us to build up a lead of more than a minute in normal racing conditions."

Nicolas Lapierre
"I'm disappointed, because we had the speed to win here. After the half-way stage, we had a comfortable lead which meant we could control from the front. The safety car period ruined our chances and it's not easy to accept… Having said that, we can be pleased with the balance of the car. We were one of the fastest cars on the track. We'll analyse the positives and the negatives so we can come back stronger at the next few races."

Gustavo Menezes
"I think it was an interesting race to watch! Nicolas was incredible at the start, grabbing the lead on the opening corner. We continued to increase our advantage until I took over behind the wheel. When it started to rain, the team asked me to stay calm and not take any risks. The track dried out pretty quickly and I was able to complete a triple stint at a good pace. Unfortunately, all our hard work was wiped out by the safety car period. I suppose it's also part of racing… In any case, the car was fantastic to drive today. We have the potential to win."

Matt Rao
"Nicolas and Gustavo had done a great job at the start of the race, since I had a solid lead when I got in the car. My stint began well and I managed to maintain the gap despite the rain and the ‘full course yellow’ periods. When the safety car came out, all the LMP2 cars became bunched together and our lead was wiped out. I pushed to try and hold onto first place, but the tyres went off quickly. I was unable to defend my position because I then had a lot of oversteer. I'm disappointed that the safety car ended up ruining our race."