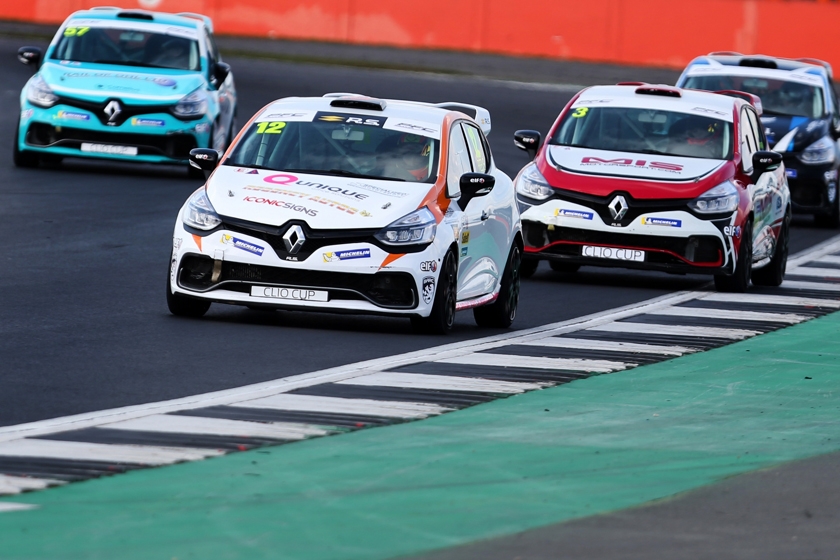 Nick Reeve (Romford) and the Specialized Motorsport team celebrated a dream debut in Renault UK Clio Cup Junior with victories in both the championship’s opening two rounds of 2018 at Silverstone (Sun 25 March).

Reeve also started both races from pole position, although his wins were achieved in contrasting circumstances…

In the first race he led all the way until the penultimate lap when he was overtaken in a robust move by Team Pyro’s Gus Burton (Colchester). Burton went on to cross the line in first place ahead of Reeve but, on reviewing evidence, officials later decided the move had been a little too optimistic and reversed their positions in the result.

Reeve was untouchable in race two however, leading all the way from start to finish although he had to defend hard at times from another Pyro driver, Lorcan Hanafin (Guiseley) who eventually took second position ahead of Burton.

Reeve’s results mean he takes an early lead in the championship lead as the title race next heads to another circuit in Northamptonshire – Rockingham on the weekend of Sat 14/Sun 15 April.

The 15-year-old beamed: “Two poles, two wins on our first weekend in Clio Cup Junior – it’s just been amazing. The first win was a bit touch and go between Gus and I – our cars touched and I was on full opposite lock on full power to keep it pointing in the right direction.

“In race two there was pressure again with Lorcan there in my mirrors, but so long as I drove my line I always felt I’d got things covered. Thanks to everyone at Specialized Motorsport – to win first time out against some very serious opposition gives us great credibility.”

Meanwhile JamSport Racing’s Louis Doyle (Chorley) took third and fourth place finishes after highly competitive showings in the two races at Silverstone. He also set the fastest lap in each – his best in the second race establishing a new race lap record for the Clio Cup Junior around Silverstone’s National circuit configuration.

There was also an encouraging debut for Jamie-Lea Hawley (Widnes) and her Finsport team. She continually improved her lap times en route to a pair of fifth places and even ran as high as third in race one after passing both Doyle and Hanafin in one go through the Brooklands corner…