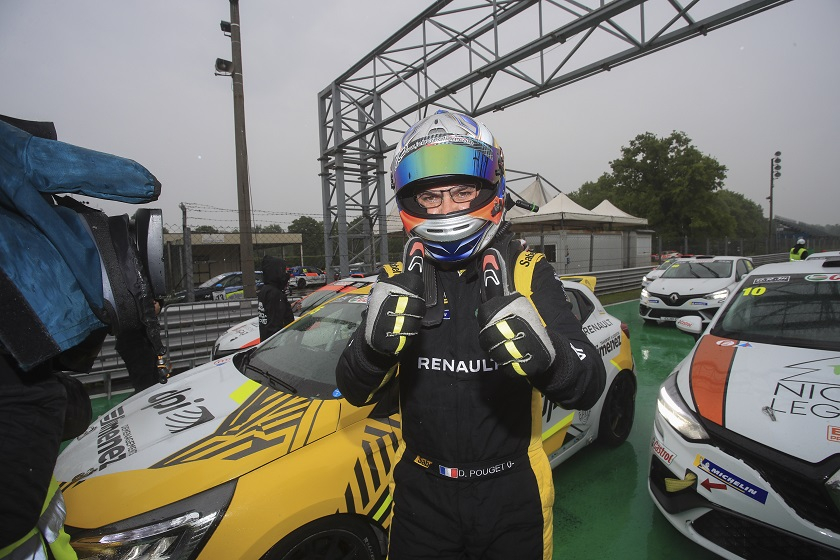 David Pouget (GPA Racing) got the upper hand in race one of the Clio Cup Europe at the Autodromo Nazionale Monza. The new leader of the general classification started third and won on a wet track ahead of Anthony Jurado (Milan Compétition) and Nicolas Milan (Milan Compétition). Italy’s Lorenzo Nicoli (Progetto E20 Motorsport) crossed the finish line in third place, but was dropped to fourth following a penalty. He still won on home soil in the Challengers Cup, as did Alessandro Sebasti Scalera (Milan Competition) in the Gentlemen Cup.

Contested in mixed conditions on Friday, Giuseppe Cirò (Progetto E20 Motorsport) and Nicolas Milan (Milan Compétition) each set the best time in a collective test session before the drivers had a dry circuit this morning for qualifying.

With another storm in the early afternoon, the race started behind the safety car for the first two laps. When the race began in earnest, Kévin Jimenez was under constant pressure from those behind him on the grid. Starting seventh, Lorenzo Nicoli rapidly moved up five places to slot just behing the poleman and ahead of Mickaël Carrée, who lost ground when he missed a corner.

Once in command of the race, David Pouget used his vast experience to break the tow from his rivals. The duel between Kévin Jimenez and Lorenzo Nicoli let Anthony Jurado catch up and pass them both before lap eight.

Maintaining the lead in the final three laps, David Pouget went on for the win with a more than one-second margin from Anthony Jurado. Challengers Cup winner Lorenzo Nicoli fended off the return of Nicolas Milan, but the Italian driver lost the third spot on the podium post-race for gaining an advantage by exceeding the track limits.

With the victory, David Pouget takes the lead of the Clio Cup Europe, five points ahead of Nicolas Milan, while Anthony Jurado moves up to third place. Kévin Jimenez remains atop the Challengers Cup classification despite retiring after contact. Lionel Viguier, who is not racing at Monza this weekend, still leads the Gentlemen Cup thanks to the points he scored at Nogaro.

Thanks to his impressive drive from sixth place on the grid, Anthony Jurado also won Group A on his 27th birthday. After this first race of the season for this group of meetings, the Frenchman is the first leader of Group A ahead of Lorenzo Nicoli and Simone Di Luca.

Meanwhile, Lorenzo Nicoli and Alessandro Sebasti Scalera respectively took top honours in the Challengers Cup and Gentlemen Cup in the Clio Cup Europe and in Group A. The former won ahead of Filippo Berto and Fabrizio Ongaretto (PMA Motorsport), while the latter beat Quinto Stefana (Oregon Team) and "Due" (Oregon Team).

The Clio Cup Europe competitors will have an early start tomorrow with the second qualifying session at 8h30, then race two of the weekend beginning at 14h35.